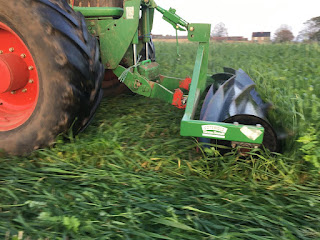 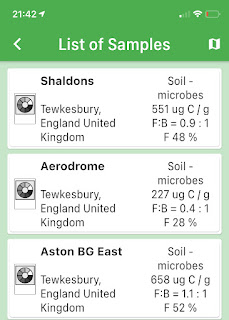 Farming never ceases to amaze me! This time last year we were gripped in the clutches of the 'Beast from the East' and this year, (at the moment) it feels like the 20th April not the 20th February. Soil conditions are lovely and the first doses of fertiliser are being applied on smooth dry fields. Under the surface the soil has benefited form the dry summer and dry winter, with increasingly good structure being observed every time we dig a hole. The ewes in mid pregnancy now are jumping about like spring lambs every time they are moved from cover crop to cover crop field.
The pressure is on the grazing girls to eat fast as spring crops need to be planted soon. With dry weather forecast hopefully we will start planting next week, almost 2 months earlier than last year and 3 weeks earlier than normal. First on the planting list will be spring barley, followed by the peas in a few weeks time.
The sheep have a done a great job grazing off the rye and vetch on the hill and soon they will be split up into their grazing groups ready for lambing and its back onto the grassland then. The use of cover crops has some many wider benefits as well as reducing costs in the farming system system. Under this stone on the headland I discovered a fantastic population of Carabid (Ground) Beetles all waiting to pounce on any unsuspecting prey. There are over 350 species in the UK, does anyone know what these ones are? The adults and larvae will feed on other invertebrates, slugs, snails and carrion. Some smaller species will also feed on aphids, so they could be a very helpful ally in the season ahead.
One slight worry that I have is that we are too dry. There is no water in the ditches and the springs are low as well. Could this be another very dry, drought year on the back of 2018? Time will tell but if we can get our crops established now into good conditions to allow roots to grow, develop and explore as much of the soil as possible we stand the best chance of making the most of the weather ahead.

I had a really fascinating day in Dorset today, exploring the use of cover crops to capture nutrients, (mainly nitrates) and stop them being washed through the soil profile and into ground water. The day was organised by Wessex Water and the Catchment Sensitive Farming organisation. Fellow Nuffield Scholar Tim Stephens and his team have put together a matrix of different cover crop species and seeding rates to look at establishment, nutrient capture and suitability within the field. The catchment also has porous dotted around the fields and every 2 weeks from October to the end of January samples are taken and the levels of nitrate in the water assessed. These values are then turned in to a Kg/Ha of nitrogen to give farmers a vital guide as to where leaching is occurring in the farming rotation and how much is being lost and when leaching occurs.
It seems that the worst leaching occurs after Oilseed Rape and Wheat, probably due to the higher levels of fertiliser they receive but also due to the very inefficient way these plants use the applied nitrogen. Wheat for example is only about 60% efficient when looking at applied or synthetic nitrogen fertiliser. Where cover crops are used the leached level of nitrogen is about 50% that of land farmed without cover crops. This has a significant impact when looking at the catchment as a whole. It is great credit to Wessex Water that they have decided to take this partnership approach to try and reduce diffuse pollution working together with the farmers in the catchment.

Also on hand were a team of entomologists who have been assessing the impact of cover crops on the insect population. The picture above shows the numbers of insects trapped over a 7 day period. The 2 trays on the left show the beneficial's and on the right are the pests. The top half shows the numbers and type captured in the cover crop field (oil radish and phacelia) and the bottom half shows what was captured from a control field i.e. no cover crop. This level of detail is very encouraging. This clearly demonstrates that cover crops are hosting higher insect levels all round but significantly more beneficial insects that will predate the pests. This is so important when looking at using an Integrated Farm Management approach to try and reduce the amount of pesticides we might want or need to use. There were lots of carabid beetles, who's larvae predate slugs which is also very positive. The benefits weren't just in this cover crop species mix. the photo below shows what was captured within a buckwheat, oil radish and phacelia mix. The predator list includes, carabid beetles, springtails, harvestman spiders (not really spiders at all), ants, spiders, and parasitic wasps. The pest list includes mites, flies, aphids, snails and a slug.
The session continued in the local village hall with a great presentation on 'Making the Most of Cover Crops' by Ian from Oakbank. Ian talked about different cover crop mixes, how and when to establish them, and the merits of diverse mixes and the impact of this type of farming can have to the on the bottom line and the better environment. A great day of learning.

Back when we planted the oilseed rape crops in August we also planted their companion crops. This year we used 10Kg of vetch and 2kg of  Berseem clover/per hectare. These companions have grown very successfully through the autumn and into the winter. During the winter we sprayed a weed killer on most of the crop to remove the companion crops as well as weeds like sow thistle, mayweed, brome and black-grass. This herbicide does not affect the oilseed rape crop. Both of these legume crops are able to host soil bacteria to make plant available nitrogen from the atmosphere, something that the oilseed rape crop in unable to do. We hope that as much as 30-50Kg/ha of nitrogen will be available free of charge from these companion crops, easily covering the initial cost of the seed. This could be worth between £25-£41/Ha.
The picture above shows the crop where the companion crop has been sprayed off. We can measure the GAi (Green Area Index) or amount of green plant material with an app on a mobile phone. This picture shows a GAi of 1.34. There is about 50Kg/Ha of nitrogen in every GAi of an oilseed rape crop. Therefore this crop has captured 67Kg of Nitrogen. The picture below, where the companion hasn't been sprayed off, has a GAi of 3.05 indicating a potential level of 152Kg/ha of nitrogen in this whole canopy. Whether all of this canopy will relate to available nutrients for the oilseed crop to capture is something we don't know but its very interesting to see these levels of free nitrogen, even accounting for the 25Kg of fertiliser applied at planting. We are planning to leave this area of the field until harvest to see what effect it has on the overall yield of the combined species. We should be able to reduce the amount of nitrogen this part of the field receives in order to keep the crop standing but also to rely on the nitrogen being created by the vetches and passed over to the oilseed rape. Time will tell what the outcome will be!
Posted by Jake Freestone at 11:43 51 comments:

This winter we have an exciting new project on the summit of Bredon Hill. At about 950ft above sea level we have some very thin soil which has been growing enough grass for our sheep since about 1990 when it was converted from crop production. All of the grasses and wild flowers have naturally appeared from the soil seed bank or from birds bringing them in.
The grassland has become quite old and matted so a change in grazing technique was required. As we have cattle of our own we have very kindly adopted, for a few weeks, some young heifers from the Kemerton pedigree Red Poll herd. Their job is to eat the standing grass, which as this time of year is like a hay crop, and tread in the inedible bits. All of these hooves will push the uneaten old and dead grass into the soil where the biology (bacteria and fungi) will start to break down the material and recycle the nutrients.
Over time this will improve the quality of the grassland enabling wider species to be introduced. The cattle are being fed hay, which we made back in July, from the species rich tower field with the hope that these ancient species will be moved across to improve the diversity of the sward in the neighbouring fields. The cattle will be socked quite tightly to make sure they eat the right amount of grass and moved on accordingly, always with a supply of hay nearby.
It's a great example of how farmers can work together to get the best results for all parties. These cattle are traditional breeds and will be very happy on the hill whatever the British climate will throw at them.
Posted by Jake Freestone at 18:00 9 comments:

I think this could have possibly been one of the best autumns for establishing winter crops I can remember for quite some time. After the very dry summer months we started to get rain at just about the right time. This rain enabled weeds to germinate in the stubble's and cover crops before the main crops were planted. We had enough rain over the planting period to make sure that the seeds we planted germinated rapidly and emerged very quickly.
This year we have only used seed dressings with Zinc and Manganese on them to kick start the growth of the young plants, except on 1 block of barley we are growing for seed. Every year we have tested leaves for deficiency and these trace elements have always come up short.
One dilemma I have had is whether or not we should be spraying an autumn insecticide to control aphids. The aphids (Bird Cherry-Oat and Grain Aphids) could be carrying a virus called Barley Yellow Dwarf Virus which stunts the growth of plants and reduces yield. The only problem is you don't know if the aphids in our crops are carrying the virus and if the plants have been infected until the spring, when its too late to treat. The AHDB has developed a tool to assess when you should spray for aphids. This can play a crucial role when we are using Integrated Pest Management to responsibly use pesticides. This means that when we see a pest, we monitor its development and then spray with the correct product, with the correct amount of water and the correct dose rate to take the pest out. The tool can be found HERE
As we are trying to reduce the levels of insecticide we apply on our fields I have decided not to spray half of the wheat area that was later planted but rely on our beneficial predators to help reduce the numbers of aphids. There are always lots of spiders webs across the fields and the aphids should provide a tasty snack! The Game and Wildlife Conservation Trust did some research which indicated that the effect on beneficial insects of that autumn spray was still apparent the following June.
Providing grassy margins around our field boundaries and beetle banks within larger fields also help create habitat for beneficial insects to live ready to strike at invading aphids. We will see in the spring whether or not this was a good decision! We need a good hard winter to help kill off as many aphids as possible.
Posted by Jake Freestone at 20:19 17 comments: