Well the title says it all!!  Forgive me for this blog but its been a week brewin' and a stewin' and there are no fancy video's put to music, for if there were I would be struck off!  In summary 2 years of vists, meetings, planning and at least £60,000 of Natural Englands funds spent to date and we are no further forward, he's more....
Over 2 years ago we could see the termination of our Countryside Stewardship Agreement and Entry levels Stewardship happening on the 30th September 2010. Natural England (NE) had European funding and were willing farmers to take up HLS options on their farmland.  We got NE involved from day one to work together from the onset of the scheme to deliver the optimum benefits for the farm business and our environment.  We studied hard, did the Farm Environmental Plan (FEP) looked at our natural biodiversity, paid for bird surveys and helped out in the COSMIC study to assess our archaeological credentials to get into the scheme (see earlier blogs).  This has helped future schemes assess the risks to archaeology much more effectively i.e cheaper, faster and more accurately.   All of this has taken up considerable time and funding.  At last the joint ELS/HLS application was drawn together and handed in on the 17th June 2010.
Our scheme covered, in summary, all of NE targets and then some...SSSI Calcareous grassland, Orchards plans, species rich grassland, woodland pasture, extensive heritage sites, including 5 SAM's (scheduled Ancient Monuments), arable bird options, arable plant options, open access, educational visits, the list goes on.
During harvest we had an onsite meeting and everything was going to plan, only one meeting required as the NE staff knew exactly what we were planning to do.  The overall scheme was included in this years NE budget and the capital works were budgeted for over the next 5 years.  Busy schedules and the inevitable computer delays meant that the date slipped into October.  Computer delays that are of the Rural land Registry's doing, this parcel number doesn't match that number or this code doesn't match another code.
Then came the 20th October- meaning the scheme needed to be signed, sealed and delivered.  It was added to the computer after it locked out a few times and was ready to sign on the Tuesday (19th).  Then, wait for it, there was no-one senior enough to actually sign it off.  Just for clarity and in case you didn't hear that bit, It was sitting there ready to sign.  Had it been a smaller scheme it would have gone through.  So discrimination is rife at Natural England, size really does matter! So in our case it's the bigger schemes with more diverse habitat that will actually deliver the best results and be more efficient with the funding, that get penalised.  In our case having already had 10 years in CSS and 5 years in ELS.
I attended the Sainsbury's 'Farming for the Future Conference' on Friday at Stoneleigh Park, where Jim Paice (Minister for Agriculture and Food) was delivering a speech so I managed to have a few words afterwards.  I will let you know the outcome of his findings when I get them.  I hope he will be able to pass on the concerns to Caroline Spelman, Secretary of state for DEFRA, mind you a letter will be on it's way as well, I don't expect she will be reading my blog!
Where to now?  NE are saying wait until 1st April but what happens then?  Will there be any funding?  How much and will it fit into our farming business.  NE don't know and I don't know the answers but I do know that whatever trust there was between this farmer and NE (policy makers) has gone in the same direction as the Dodo and there's no scheme around today to bring him back.
Posted by Jake Freestone at 08:13 No comments: Links to this post

Yesterday was the first full day using our home made bean drill.  The machine started out as a sublift cultivator and a cannibalised accord air seed hopper and seed metering mechanism.  The shakerator legs are mounted 50cm a part and we're blowing about 20 seeds/m2 down two tubes behind each leg.  We thought two tubes might give us a little more protection in case one of the tubes blocked up.  Although conditions are a little damp the machine is going well, with good seed placement and fairly even depth (15cm).  Hopefully we can cultivate the ground to level it off before too much wet weather arrives.  This will aid herbicide activity, increase combining speed and make cultivations for next wheat easier and faster.
Posted by Jake Freestone at 09:45 No comments: Links to this post

Head In The Clouds 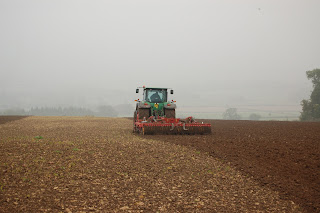 Derek was out early this morning working ground after summer turnips up on Bredon Hill.  The field is called 'Cobblers' and was planted with stubble turnips in April earlier this year.  After the lambs had eaten all of the turnips we sprayed off the remaining weeds with glyphosate and left them to die off.  That was about 3 weeks ago and so in preparation for drilling the land is worked with the Vaderstadt Topdown. The tilth was really good and after 24hrs drying will be ready for planting on Sunday morning!  The land should be in really great condition with the poultry manure applied for the turnips (lots and lovely natural fertilisers) and the sheep acting as mobile fertiliser spreaders the wheat should get off to really great start.
Posted by Jake Freestone at 20:00 No comments: Links to this post Quick update on the new oilseed rape drill out come.  The picture above is the result 35 days after the seeds were planted.  We have managed to establish 36 plants/m2 having sown 80 seeds/m2 (45% establishment).  The higher seed rate was used as a higher seedling loss was anticipated due to seed falling down the leg slot and increased slug activity as consolidation was not as easy. 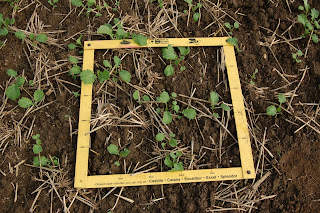 This picture is in the next door field sown at the same time but we only planted 60 seeds/m2.  The establishment has been much better with 52 (86%) plants established.  I would however think that 52 plants could still be a little too thick.  Only time will tell and there will be some plant loss through the winter. It's still a long time until the spring.  The next thing to look out for will be Phoma, sure to be a problem with warm temperatures and rain showers to get the spores moving!
Posted by Jake Freestone at 15:45 No comments: Links to this post 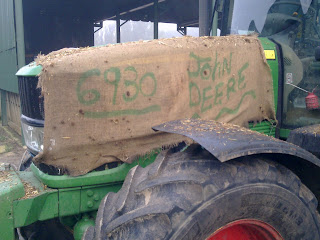 John Deere's new tractor livery has been spotted out and about at Overbury this autumn.  Any comments as to the reasoning behind the new design?
Posted by Jake Freestone at 10:32 No comments: Links to this post