Right here we go, the challenge I have decided to undertake is to swim for charity! The target is to raise valuable funds for Marie Curie, who nurse terminally ill cancer patients at home. The financial target is to raise £1,000 although I will reserve the right to up the target as donations flood in! The physical challenge is to swim 5km at Gloucester Leisure Centre on the 25th March in a 3 hour period. Training will begin in earnest on the 1st February when alcohol consumption will cease, perhaps the hardest challenge? You can read more about the national challenge on http://www.swimathon.org/

If you feel the need to help me raise these funds you can do so on-line, (just click on the above) or if you are passing the office then do call in where there is a sponsorship form! Thank you in advance.

On a different tack another date for your diary, the 15th APRIL, is our next lambing day! It was a great success last year so book early as places will be reserved on a first come basis!

Posted by Jake Freestone at 10:25 No comments: 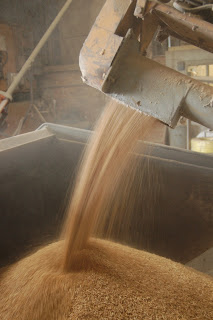 The first load of naked Oats was dispatched today from the grainstore bound for 'Morning Foods' in Crewe. The lorry arrived whilst we were loading sugar beet and so a short wait was required. As it was the first load from the bulk store Graham had to open the store with the auger to take the pressure of the crop off before the doors could be opened to allow the JCB access. This load will have taken an hour to load although when we're in full swing it should only take about 25 minuets to load a 30 tonne lorry.
Posted by Jake Freestone at 13:15 No comments: 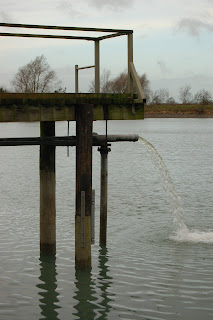 While the local rivers are all bursting their banks after the recent rains our main winter storage lagoon has been relatively low of water after the summer use for the salad onions. We have made some repairs to one of the legs of the jetty and filling can now commence! It puzzles me that when there is flood water about and it's merrily washing through peoples houses and blocking roads that we still have to pay to abstract water upstream of the flooding. You could argue that we are providing a public service, less damage to property, less insurance claims and so on, ending with the question, shouldn't we get paid to help?
Posted by Jake Freestone at 09:24 No comments: 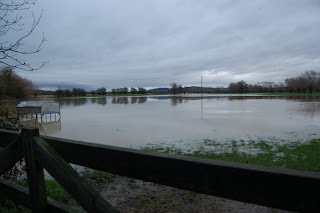 You are crop walking and upon return your boots weigh twice as much as you do.
When 5 minutes after washing your truck it needs doing again.
All the sheep are huddled under the one bush in the middle of a field.
A group of 4 Herons set up a stake-out in the middle of a field.
When Sian, Emma, Charlie, Fiona and the host of other weather reporters all say we're getting wet. How can they always get this weather correct? It's a completely different story in the summer!
When the rain gauge fills up over-night.
All your coats are wet because there's not enough time to get them dried.
All the local horses are turned out dressed in, to the untrained eye, water-proof coats, scarves and I'm sure I saw one with boots on.
The flood meadows are underwater (see above). These fields regularly flood, which provide nutrients for the field, relieves some down-stream pressure and provides a good damp habitat for wadding birds to forage and feed in.
Posted by Jake Freestone at 09:16 No comments:

I think I am learning a new language having undertaken the pleasurable task of starting 'Farmer Jake's Blog'. The Black Sheep http://www.fwi.co.uk/blogs/black-sheep-blog has included me in meme or 5 things you didn't necessarily know about me: - so here goes......... 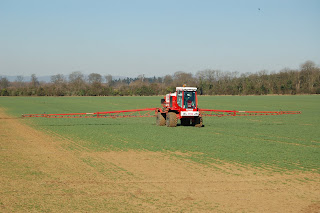 Next week will be putting our two crops sprayers through their annual MOT for the NSTS (National Sprayer Testing Scheme). This involves checking for leaks, drips, corroding pipes, lights, accuracy of application and 3 A4 pages of other checks and boxes to tick. This annual MOT is part of the Voluntary Initiative (VI), an industry led scheme to improve the environmental impact of spraying activities and to therefore avoid a pesticide tax, (which would cripple the arable enterprise). It also enables the farm to be crop assured, another scheme demonstrating our commitment to providing safe, traceable food. Finally it means that we can demonstrate our professionalism as we know our machinery is ready to swing into action in the early spring.

In order to cut the costs down, 4 other neighbouring farmers all bring their sprayer to our farm so that the engineer can complete more tests in a day, thus reducing the cost, both to the engineer and to us. The Bateman RB25 shown here is fertilising Naked Oats in early spring last year.
Posted by Jake Freestone at 16:29 No comments: 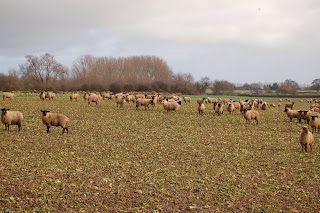 What an end to the year, wet and wild, no not another instalment from America but the weather. It was a strange year with 693mm of rain. Monthly variances ranged from 6.6mm (Jan) and 118mm (May and most of that came in 4 days!) The total was about average but the variation in monthly totals was bizzar! The wettest year since 1990 was in 2000 with 873mm and the driest was in 1996 when 458mm fell, so we were about average in 2006.

These are some of the lambs being fed outdoors between Christmas and New Year, just after a very wet night! They are not happy but putting down some straw put a spring back in their steps. The turnips are running out and as a result we have taken 350 lambs to rear indoors on purchased feed, to ease the pressure of the home grown forage. They should start to be ready to sell from early January onwards.

It's time for a New Years Resolution I guess and it would have to be to remain calm whilst talking to the DEFRA helpline (LOL), about, well anything really! Those of you who have experienced this phenomena will know that the chances of keeping this resolution are, to say the least slim and....I know it's not the person on the end of the telephone's fault, and I know the help books are written backwards, inside out and cross referenced beyond belief, and I also know that the computer always says NO! But lets be optimistic at least until the end of the month!
Posted by Jake Freestone at 15:12 1 comment: