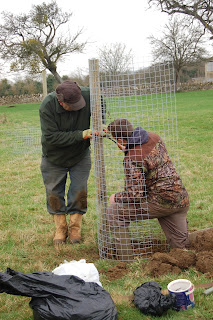 Phase 1 of our Orchard Restoration has begun!  After a very hectic couple of weeks organising, planning and re-planning we have finally planted a few orchard trees.
For this first year we have chosen some 'Off The Shelf' varieties grown in Worcestershire as a starting point.  As a result of some research, in conjunction with John Clarke from The Kemerton Consservation Trust, we have chosen to plant the following apples: -  Adam's Pearmain, Ashmeads Kernel, Blenheim Orange, William Crump and Worcester Pearmain.
This year 50 trees are to be planted in two orchards around Conderton.  Once the spacing had been figured out (this came from Rob at FWAG's Orchard Report-see previous blog 20th Jan 2011) and the stakes hammered home the trees and tree guards are erected.  They should support and protect the trees for the next 15 years or so.  The main pests will be sheep and deer, rubbing and trying to graze through the mesh, and voles nibbling the bark on the ground.  Squirrels could also be a problem we will need to watch out for. 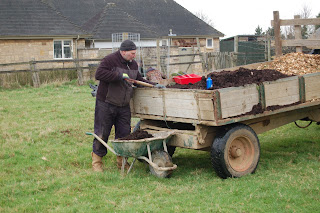 A mixture of soil and mushroom compost is returned around the root balls.  This combination should provide a breakdown of organic matter that will provide nutrients for the young trees.  This organic matter should also help retain moisture for longer periods of time through the summer.

I guess in reality once the trees are planted the hard work will begin.  There will be annual pruning to encourage the trees to grow upwards and out from the top of the guards.  This pruning won't start for another 12 months or so which will allow a little bit of time to read up on the subject and maybe even get some training!  For the time being though we can assess the trees development through their first year and look forward to some tasty eating and cooking apples in the years ahead! 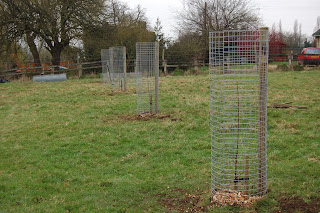 Posted by Jake Freestone at 15:45 No comments: 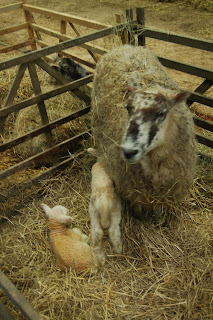 The first lambs arrived just in time for the visit from Year 6 children of Wychall school on the 15th of February, (see last blog).  So far we have had a slow start to the lambing with 6 ewes giving birth since the predicted start date of Valentines day.
The first group of ewes to lamb are our  North of England Mules  These have been mated with Texel rams to produce crossbred lambs, the females of which we will be keeping for breeding from, when they are about two years old, or 'shearling ewes'.  We have about 200 to lamb now so fingers crossed the weather doesn't get too cold and wet for the lambs when they are out in the fields.
We will be hosting our very own Lambing Live at Overbury on Sunday 17th April where you can come and experience the excitement and drama of the lambing pens first hand.  There will be orphans to cuddle, feed and play with; hopefully our ewes will still be performing, if not there is a great video of the process showing in the village hall (taken at Overbury).  Our Game Keepering Team will have displays giving you a feel for what they do and some of the interesting sides of the countryside and wildlife issues they come across.  There will be refreshments in the village hall and some static displays there as well.  For the latest information on our lambing day become a Facebook Fan keep following this blog, or go the Farm Website here
We always warn Pregnant Women not to accompany your children on this trip for the health and safety of you and your baby.
Posted by Jake Freestone at 07:54 No comments:

Wychall School Visit For The Day 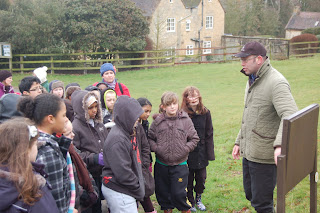 Today was the first visit of the year to Overbury by Wychall Primary School from Birmingham.  The first visit had to be cancelled due to the bad weather in November so it was a very excited group of year 6's that arrived just after 10 this morning.  After a quick visit to the loos in the village hall, we headed to the park to look at our LEAF boards and then on to our Elm Tree, (see blog on the 8th Feb).
After that we walked through a small area of woodland, discussing different habitats and how we manage trees for conservation even after they have died.  We then met the Croome and West Warwickshire Foxhounds by the Estate Office, where we all met 'Goldie' the Golden Eagle, with a 7' wingspan, very impressive, and lots of foxhounds.
We loaded up into the coach and headed for Park Farm to see our own Lambing Live.  We saw 3 ewes that had 5 lambs between them and we met Tod our shepherd, up in the sheds making hurdles in preparation for lambing.  Our lambing pens will be open to everyone on Sunday 17th April.  Keep an eye on this blog, farm website or twitter for more details.  A brisk run up to the hill fort on the the top of Bredon Hill followed and a look around at the scenery and to discover direction Wychall School and home is in.
A hearty lunch followed accompanied with some fabulous homemade tomato 'Billy Soup'! After we had warmed up we headed to the fields once again, this time looking at wheat and oilseed rape fields. 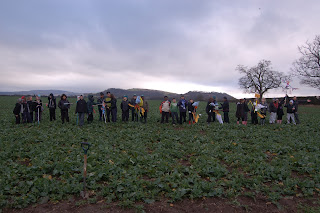 Here is everyone with their scarecrows, made at school and brought down for us to judge.  There were some very good efforts with CD's, ribbons and faces all tied or glued onto canes, mops and sticks.  The winner was hard to choose but eventually after a close contest Penelope and I choose this one which will be keeping the pigeons well and truly scared from Bean Hill.  Thank you to everyone for being so well behaved, we had a great day taking you round the farm. 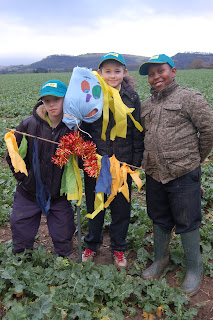 Posted by Jake Freestone at 21:52 No comments:

An Old RELIC Puts in an Appearance 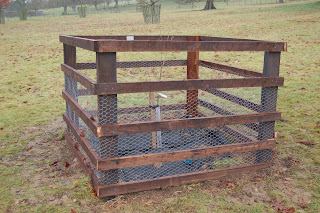 ﻿In the 1970's Dutch Elm Disease killed millions of Elm Trees across the country.  Overbury was no exception with many trees succumbing to the disease.  We have a field called 'Elm Piece' which once hosted many many hedgerow Elm trees, now there are none.  Most British Elms produce suckers  rather than seed and once those suckers reach a certain size they too succumb to the disease.
For reasons not fully understood a very old tree from Comberton survived and under a project called RELIC (Replanting Elms in the Countryside) cuttings were propagated from this 'mother' tree, producing young vigorous 'nurse' trees which we have been able to get hold of.  It will take many years to us to see if the off-spring have inherited the parents restistance. 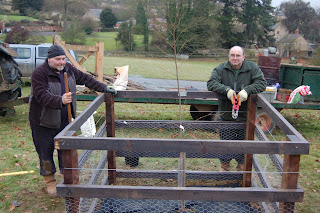 Derek and Gordon have planted 6 of these trees around the farm.  Here they are having planted one in the Park opposite Silveril House.  If you come to our Lambing Day on the 17th April, you will be able to see this tree for yourselves, as well as the excitment of the new born lambs and the game keeping display.
The first job to do was to site the trees, we put 3 in the parkland and a further 3 in hedgerows dotted around the farm.  They were sited where they would not be shaded from other trees or hedges.  Once the site was found the guard was put uppost frame was erected, rabbit fence dug in and also a pipe put down below the rooting zone so that we could water the trees during dry periods.  I put this pipe under the roots to encourage those roots to go deeper in search of water.  Once the tree was planted, with lots of mushroom compost, to provide nutrients and water retention, garden weed matting was laid over the ground to reduce competition from weeds.  Finally a stake was hammered in and the tree attached, oh and a spirral rabbit guard for 'belt and braces' protection. 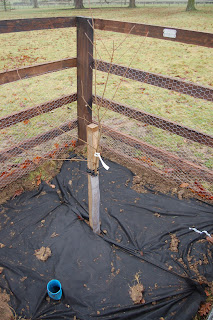 The end result is shown here (with it's name tag), not the end of the project by any stretch, there will be watering during the hot weather and next winter we might need to start prunning (depending of the summer growth).  If you are interest in the project then have a look at the Kemerton Conservation Trust and follow the link.  Big thanks to John Clarke who was  one of the founding members of the project and who sourced our trees.  I hope to be able to lay my hands on some more trees and maybe Elm PIece will live up to it's name again.
Posted by Jake Freestone at 20:03 No comments: