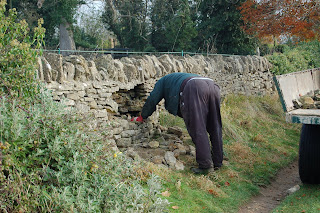 This is Andrew mending a dry stone wall somewhere on the farm. Does anybody recognise where it is? There are a couple of give away clues. The farm has to maintain and repair over 19.5 km of dry stone walls, excluding those that divide woodland and surround property. Last year Andrew spent 11.2 weeks repairing these walls. It is a very skilled task, a little like doing a large jigsaw, making sure all of the bits of stone marry together to stand up for any other 70 years.

Why do they fall down? There are lots of reasons, deterioration of the stone, exposed to wind, rain and frost for so long is the main reason. They also get knocked down by sheep, deer and badgers all trying to get to the, obviously greener grass on the other side of the wall. Andrew tends to repair the walls during the winter months when most of the arable work is completed and the fields are too wet to work. Tod also helps Andrew on the larger jobs and when the walls are 'topped' i.e. putting the upright stones in place and concreting them in place.
Posted by Jake Freestone at 15:30 1 comment: 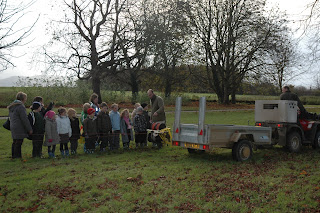 Yesterday was the 1st visit by Wychall Primary School to Overbury as part of the 'Year of Food and Farming' twinning project. The day began with an introduction from Penelope and me, then a boot dip and a trip to the toilet! After that the children moved to the Estate Yard where we split into 2 groups looking at our sheep flock, with Tod and the kitchen gardens with Steve. Storm, Tod's sheep dog stole the show and loved the attention from everybody. The children touched sheep feed and some lambs, a first for many of them. Tod also gave us a quick fencing demonstration, with the quad bike and rappa fencing system, then it was off to the village hall for some well earned lunch. Billy and Michela had cooked up some ingredients that the children harvested from the garden and we all tasted lovely warm carrot and celeriac soup, with a risotto side and maple syrup glazed beetroot (my favourite, thanks Billy!) After lunch we tested the coach drivers skills up to the Eastern end of Bredon Hill to look at the view and talk about LEAF boards. It was very cold and windy so we retreated to the coach went to look at a field of Brassica's! 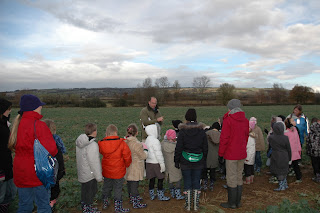 Then we checked out a wheat Field and then Charlie dug up a bean plant. It was then time to go so everyone clambered back onto the bus, dirty wellies included and headed back to Wychall. It was a great day, everyone enjoyed the experiences and we all learnt lots of new things. We will be contacting the classes again for our next video link. Tasks, based on what the children saw and learnt about will be set. Good Luck children and very well done!

Short back and sides 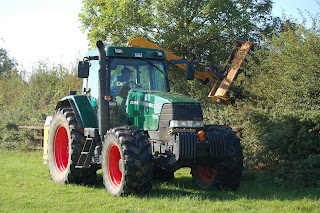 This is sight well known to locals at Overbury or anybody passing through the village at this time of year. It is Gordon, hedgcutting expert, pruning and very skillfully shaping and molding the hedges on the farm. Gordon has looked after, trimmed and shaped the hedges that every-one drives past for over 20 years. Some people notice and comment, which is great, others just get irate about the hold up as they scurry off to work, late because there was a slight frost on the windscreen that held them up. Hedge cutting is a very important job. Along the sides of roads and footpaths it removes obstructions and increases visibility for the general public. As hedges grow they need to be trimmed down to encourage growth lower down to give shelter to small mammals and birds. A nice A shaped hedge trimmed lightly every year will bear fruit that birds can eat during the winter. Leaving hedges uncut can result in a little more winter food but the hedge will soon revert to a bush, grow tall, and have a premature death. Look out for Gordon on your travels around the farm and admire the skills involved and learnt over a long period of time.

Posted by Jake Freestone at 15:27 No comments: