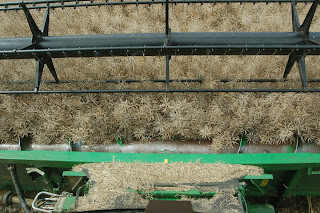 This is the view from the drivers seat on our combine harvester, (John Deere STS) while I was cutting Oilseed Rape yesterday. We started at 9.00 hrs and were stopped by rain at about 18.30. Had we missed the rain we would have finished that crop.

Tim, who usually drives the combine, was off spraying some wheat before harvest can begin on that crop next week. We now need the weather to be hot and settled to allow us to harvest the rest of the farm. We still have the wheat, oats, spring barley and beans to harvest which will take us about a month to complete, with a few breaks for the weather. We can't cultivate the ground at the moment as it is still too wet and we will damage the soil if we drive all over it at the moment, if it stays dry we will make a start later in the week.
Posted by Jake Freestone at 14:27 No comments: 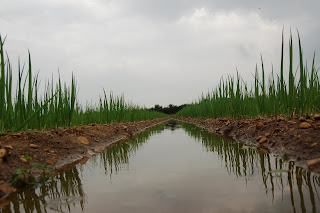 This was Aston Big Ground West today after the rains on Friday. Harvest was due to start in 10 days and with more rain forecast for the next 5 days that date might be delayed. If the crops get too big then they are not worth anything to the supermarkets as they don't meet the specification. What a waste and is that sustainable in a modern world? Whats wrong with an onion slightly too thick or a potato that has a blemish on its skin? You tell me.........
At least the field is providing a haven for over 100 seagulls!
Posted by Jake Freestone at 16:29 No comments: 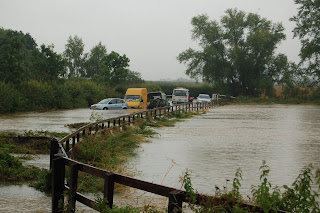 This is the scene after 144mm rain fell on Bredon Hill on Friday 19th on our usual flood spot! No-one on the farm has seen this much rain and the damage it has caused. People trying to get home, spending all night in the car it was an incredible day. The village had over 15 houses affected by the floods to a lesser or great degree. The farmland has suffered a bit, it could have been much worse. The wheat has started to go flat, affecting the yield and the quality. Some of the oilseed rape has shedded. There doesn't seem to be any real improvement in the weather this week either. I took this shot on Saturday morning. On Friday night the water was level with the top of the post and rail fence. The owner of the landrover was airlifted from his roof at 5.00am. What a day!

Harvest Begins Between The Showers 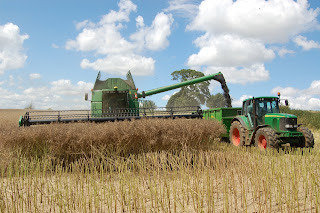 Today, the 18th July, saw the start of the harvest at Overbury. It is still quite early for us, the average start date is on the 24th July and considering the wet weather through June and July it is amazing that the crops have ripened at all. We have started in a field called 'Horse Close' and we are cutting Oilseed Rape, a variety called Castille. It's too early to assess the yield but the moisture started at 15.5% for the first load. The second load was better at 13.5%. We need to store the crop between 6-9% so Graham will be busy in the drier. The weather forecast looks OK for today and tomorrow then rain on Friday, so we're pressing on to grab what we can before the rains arrive again. Heavy rain on a ripe crop of rape will cause the pods to shatter, spreading the seeds all over the ground and lost to the combine, therefore reducing the yield. It's worth drying rather than loosing it! It could be a late night!

Posted by Jake Freestone at 11:43 No comments: 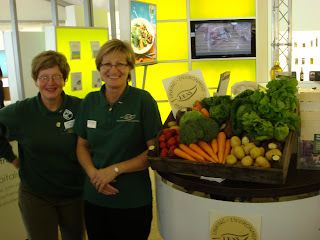 These splendid examples of a LEAF employee's are Justine (left) and Val. They, along with the rest of the team work tirelessly for the charity promoting all that is great about British Agriculture and how we can communicate that fact to the general public. Val and Justine were at the Royal Show at Stoneleigh on a 'LEAF Pod' in the Waitrose stand.
I wasn't sure what to expect when I was told they would be on a 'LEAF pod'. I had visions of nightclub podiums and costumes reminiscent of an Adam and Eve fancy dress competition. The show was damp to say the least with torrential downpours. Numbers were well down on where they were last year (I expect). Many two wheel drive cars were being pulled out of the car parks onto the hard roads. It was a shame but I gather the bulk of the show has been cancelled on Wednesday for safety reasons. 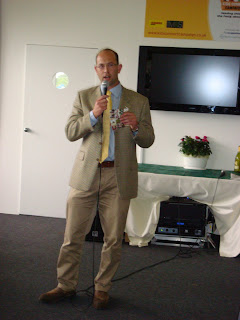 At 5pm I was over at the Marks and Spencer's Pavilion adjacent to the main ring for a LEAF Royal Show Reception. LEAF had asked me to say a few words about the LEAF Marque, seen on more and more M&S and Waitrose products. The Marque is the gold standard in farm assurance. It tick's all the 'other' standard marks but includes vast requirement's about biodiversity, environment, energy use and reduction, social impacts on the community and pollution control, amongst others. Check it out on http://www.leafuk.org/leaf/consumers/ You can also look up Leaf Tracks which is a number on your produce that you can type into the LEAF site and it will tell you where that produce has been grown and give you contact details of the farmer! Now that we're LEAF Marque'd we'll be pushing our flour, whole grains, lamb and game later on in the season. I was very nervous speaking after Baroness Byford (President of LEAF), Caroline Drummond (CEO LEAF), Hugh Mowat (M&R Representative) and before Tony Worth (Chairman of LEAF and farmer in Lincolnshire)! I really did that extra glass of red after the talk! It was very successful and encouraging that a supermarket has morals and that it can deliver, through support of British farmers, real benefits to the countryside that we manage and love.

Posted by Jake Freestone at 20:09 No comments: 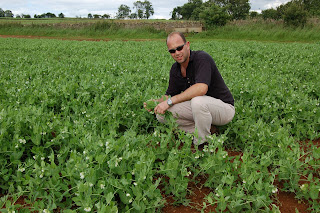 These are hand picked peas on the top of Bredon Hill. It amazes me that they will grow in this thin soil but they usually grow a very healthy crop, aired by the south westerly winds coming up the Bristol Channel.

This field was planted on the 30th April by Andrew. Andrew has worked her since April 1961 and has ploughed, worked and cultivated parts of Bredon Hill every year for 46 years! Andrew takes great pride in the peas, scarring off pigeons, rooks and crows with un-resting ferocity, using rockets, bangers and scarecrows. If you have seem them protecting the peas who do think they were modeled on? Answers via the comments please and there is no prize.
Posted by Jake Freestone at 20:01 2 comments: 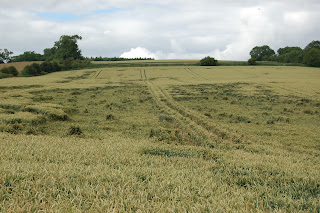 The heavy rain and high winds are starting to have an effect on the wheat crops on Bredon Hill. This is a field called Elmont, (the field that grew the Soisson wheat that we milled in 2005) it is a variety called Zebedee, unlike the cartoon character this will NOT spring back up!! At least we are not the only ones to suffer. The down sides to fields like this are many. The worst worry is the deterioration of the quality, this wheat should end up in buscuits, but with much more rain could be downgraded to animal feed wheat. There will also be a yield penalty, as the weight of each grain is reduced and the combine will struggle to pick up all of the ears of grain on the floor! A farm managers and combine drivers nightmare.

Posted by Jake Freestone at 19:51 No comments: