Lambs to The Slaughter 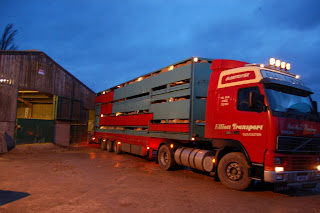 At 7am on the 10th January Tod loaded 160 lambs onto this lorry to send them off to be slaughtered in Wales. The lambs were sold through the May Hill Sheep Group and will end up on the shelves of Sainsbury's marketed as 'Cotswold lamb'. The lorry will hold about 400 lambs on 4 decks, which totals about 18tonnes of lambs. After they have been processed there should be about 8800 kg's of sheep meat worth to the farmer £19,360. By the time it reaches the supermarket shelves the total valve of the meat will be in the region of £52,000. Next time you pass a lorry full of livestock on the motorway have a think about that! Whilst I'm on the subject of slaughter I watched the 'Kill it Cook it Eat it' programs on BBC3. I didn't have a problem with the suckling pigs. The veal calves I thought were a appalling as the following animals could see their mates already dead, which did not put farmers/industry in a good light at all. The milk fed lambs which, were no more than 3 weeks old (the youngest) and 8 weeks old (oldest) also had a very disturbing end to a short life. At first the electrical tongs did not work so they were dispatched with a bolt gun, after much stress, they too could see the fate of the siblings already dispatched. I don't think it did the trade in younger animals any favours at all to the general public, although there will always be a selection of the market wanting these niche' products.

On a lighter note we scanned the ewes for the March lambing at 180% which is about normal for us and similar to those around us. You can come and see those lambs being born at our farm open day on the 29th March.
Posted by Jake Freestone at 08:35 No comments:

Labels: Kill it Cook it Eat it, Sainsbury's, slaughter 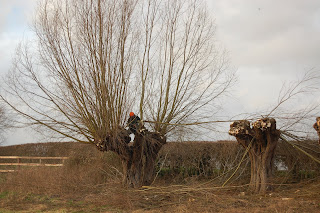 This is Derek giving a very old willow tree a hair cut. It is called pollarding and should be done about every 5-7 years. It removes all of the new growth. These branches are very straight and would have had various uses in the past from fencing materials, to basket weaving, thatching pins and anything larger used for burning in fuel production. Large scale Short Rotation Coppice (SRC) is becoming part of the renewable energy scene. Rather than letting the willow trees get this big, they are harvested just above ground level when the tree is 3 years old and then annually thereafter. The 'chips' are then dried and stored before being burnt in a wood chip boiler. If you go along the A46 from Alcester to Stratford, look over to the right and there you will see acres of SRC. 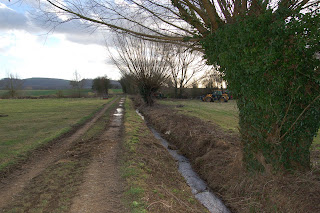 This was the area of the farm that was badly hit by the floods in July 2007. This stretch of track and hedge was under 4 feet of water at the deepest part. Check out the blog from that date to see the field from the other end. (And a few stuck cars!) The hedge was badly damaged and actually flattened by the water and rubbish floating downstream in some places. After a talk by FWAG (Farming and Wildlife Advisory Group)http://www.fwag.org.uk/ we had decided to coppice the hedgerow. This is some very old management techniques and involves cutting off the hedge at ground level. To the untrained eye we'll get told that we have removed the hedge but in a few short years the hedge will re-grow, bushier and stronger than ever. Cutting the stems of the plants encourages tillering, lots of new stems were there was once one. Derek and Gordon are shown here tidying up the last of the stray stems. We will put a post and rail fence along the line of the hedge to keep the sheep in until the hedge is able to take on that task. Whilst the team is in the area we will also pollard the willows, again a useful management technique to maintain the structure of the willow trees. 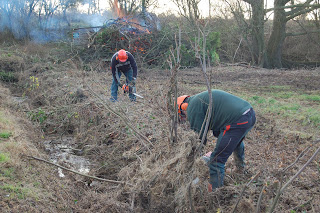 I also want to wish you all a very Happy New Year and lets keep the positive side of farming in the headlights! Keep a look out for up and coming events..... Lambing Day 29th March! Open Farm Sunday 1st June!
Posted by Jake Freestone at 15:03 No comments: