Cover Up or Laid Bare? 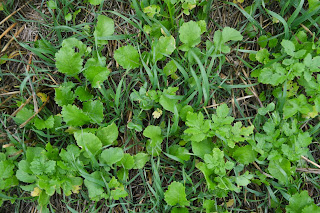 One of the key messages I have learnt from my Nuffield travels this year has been the need to look after  and feed the soil whenever possible.  This is fundamental to the farming system here in the UK.  If we look back 10,000 years the country was covered in trees and grasses; fields weren't created and there was no bare land.  It had something growing on it all of the time and this is what I feel we have to recreate now.  The soil is alive, or at least it should be.  It should be alive with bacteria, fungi and worms constantly re-cycling dead and decaying matter to release nutrients that we can then recycle.  With this in mind, the area of land going into spring cropping that doesn't not have a cover crop on it is down to the bare minimum 30Ha that we have as part of our Stewardship Agreement.
The picture below shows a field that has been split with two scenarios.  Half is in cover crops and half has been left as over winter stubble; although we had to do a light cultivation to get anything to green up.  Modern combines do not leave much grain behind.  The field will be direct drilled with spring barley next year and I can't wait to see what difference the cover crop will have made to the soil health, friability and structure.  Will it warm and dry faster with a crop on it? 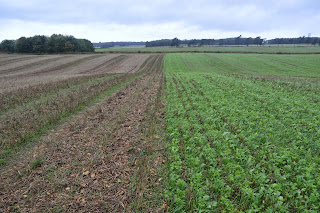 The mix contains mustard, to produce organic matter, peas to fix a little nitrogen; oats, forage rye and volunteer wheat to mop up residual nitrogen, fodder radish to push tap roots into the soil and reduce compaction and turnips, just in case we run some sheep over the field.  I have a few observations so far that I would like to share.  The crop needs to be established as soon as the combine leaves the field to maximise the moisture left in the soil.  Any soil surface exposure to sunlight and no crop cover and vital moisture is rapidly lost.  This was a lesson learnt in Oklahoma where a second crop of sesame was being planted directly into wheat stubble in 45 degree heat!  Where the soil is moved we are getting a nice germination of weed seeds as well, so there is a nice flush of black grass and brome, all adds to reducing the seed bank in the top few inches of soil.  The field also walks well, it's hard to describe but it appears to have a cushioned effect, that can only be the organic matter that later will be returned to the soil.  Did you know that a 1% increase in organic matter in the top 6" of top soil means an additional 27,000 gallons/acre can be stored?  Well it's true, meaning that periods of dry weather will have less impact on our potential yields, especially on lighter, thinner soils.  I'm not expecting a fix in a year but over a rotation we should start to see a difference.  A more volatile climate is something that we should expect more often and we need to make plans to have a more resilient farming system. Prof Sir Brian Hoskins only mentioned last night at the Sainsbury's and Grantham Imperial College Lecture that temperatures could rise between 2-4 degrees by the end of the century, this will only cause more volatility in the climate, causing more weather extremes.  Last year for example 3,200 of the 5,000 weather stations in the United States recorded a record weather event  e.g. highest temperature, lowest rainfall, highest rainfall etc. 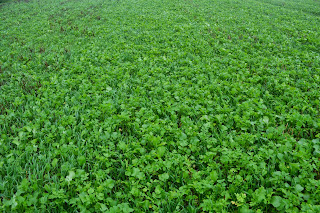 Another key benefit is the stabilisation of the soil.  All of the roots actively growing through the periods of heavy rainfall and the canopy above, shielding the soil surface will reduce water run-off and increase filtration rates.  Reducing run-off keeps soil particles in the field where they belong but also keeps phosphate fertiliser and any residual pesticides in the field rather than in the local stream.  I haven't even mentioned the amount of carbon that is being sucked out of the atmosphere and stored in the soil,  hopefully helping to turn around the recent losses of organic matter levels in the soil. Which ever way you look at it there are many positives.  But what are the negatives?  Well I guess there is the cost of the seed and establishment which when added together could be in the region of £80/Ha.  There is also the requirement for extra labour, and potentially machinery, at an already busy time of year when everyone is focused on the harvest. Do the positives out way the negatives?  Well it's early days but I would have to say that so far they do.  Are we creating a longer period for slugs to breed and feed?  Are we continuing the 'green bridge' and providing habitat for aphids transmitting BYDV (Barley Yellow Dwarf Virus) or too many brassica's potentially increasing the risk of club root?  Time will tell but as always with farming it's a long term game and there are many obstacles in the way before the results will be shown.  What I am certain of is that building soil carbon and reducing the level of tillage (cultivation) will, overtime increase the crop yields and reduce the variability of production and that can only be beneficial. 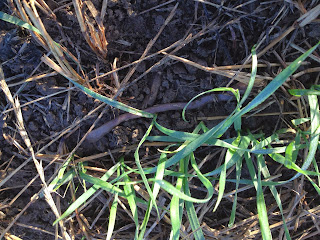 Posted by Jake Freestone at 20:04 No comments: