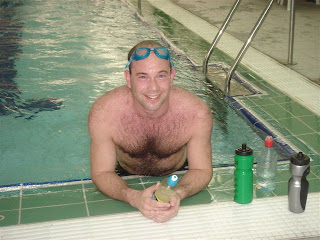 On Sunday the 25th March I woke with butterflies, but looking forward to the challenge of my big swim. 6 weeks of training; in the pool, rowing, running and weights culminating in a 5km swim for Marie Curie. After a big bowl of porridge Oats (home-grown) I headed off to Gloucester Leisure Centre. After signing in the gun went just after 12 noon when over 20 people set off in tandem. I was in a lane with 4 other people, of different abilities and distance challenges which made it interesting at times! 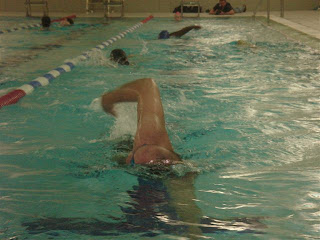 After 1 hour and 50 minutes I finally reached the end of my swim, shoulders aching but very satisfied. Shoulders were really sore for the next day but the cause was worth it. The total raised should be over £1,400!
A really big thank you to all the support and generous sponsorship donations I have received.
I will soon be looking out for the next challenge so and ideas please forward them!
Posted by Jake Freestone at 12:12 No comments: 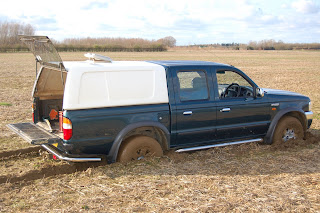 Whilst driving across a field, destined for salad onions, my faithful Ford Ranger, had that sinking feeling much to my annoyance and of course embarrassment! Derek had to come down and pull me out! We knew the field would be wet and this was all the confirmation we needed.

Cultivations are still on hold at the moment as there are wet areas in the fields that we need to drill (plant) with Spring Malting Barley. Spraying herbicides and putting fertiliser on the wheat crops is continuing well where autumns sown crops were planted.

The second ewe flock is due to start lambing next week and will be in full flow by the time our 'Farm Open Day' arrives on the 15th April. We managed to get a good article about it in the Evesham Journal, although the phone number left off an extra 1, and we should have some more advertising in the Vale Magazine due out on the 30th March.

Swimming is progressing very well at the moment, a hard week training this week, aiming for 2 3 replications of 4km, before an easier week next week before the big day on the 25th March.
Posted by Jake Freestone at 10:23 3 comments:

About halfway through my training, if you can call it that. Fitting an hour in the pool here and there, managing about 100 lengths. It nearly kills me but I think I'm getting there. I have also decided to try and increase my cardivo-vascular abilities. Sounds impressive I know and not knowing how to go about it I joined the local gym. Rivers gym has two locations, one in Pershore and one in Evesham, both within striking distance. I have never been in a gym before and to the untrained eye it is more than a little humorous! Each victim, (myself now included) assumes his or her position on an electrical gadget before plugging themselves in via an ipod dock or a heart monitor, sets up how much pain they can handle and presses go! After what seems like a lifetime of pain, half a litre of sweat and the deafening tones of hardcore dance music, the machine slows up and starts it's 'cool down' phase. In my case this allows blood to re-invade my legs giving me an assumed drug induced dullness, maybe I am overdoing it? All around the room people are plugged in, looking in mirrors and 'pumping iron'. It site would be akin to a series of Big Brother filmed in a hamster cage!

A big thank you to all the people who have sponsored me, the total in approaching £500 now, so we're on the way. Don't forget the Farm Lambing Day which is on Sunday 15th April this year!!
Posted by Jake Freestone at 13:30 No comments: