Last week we sent a group of lambs to the abattoir in mid Wales as we always do at this time of the year and when the kill sheets came back I was shocked with some of the results.  It turned out that of the 87 lambs delivered the Food Standards Agency condemned 17 (nearly 20%) livers for something called Cysticercus tenuicollis.  In total the weight loss was 11.7Kg, at £4.50/Kg which equates to £52.65 of lost income, but that's not really my point.
The disease stems from the dog adult tapeworm Taenia hydatigena and is transmitted to sheep when infected dogs shed eggs via their faeces onto the pasture.  These eggs can survive on the pasture for up to 6 months.  Another problem with dog faeces is very similar and is called Cystericercus ovis or sheep measles and is ingested almost identically. (Here's a cyst on a liver)

Once in the sheep the larvae develop and penetrate the sheep's intestine, spreading to various tissues including the omentum, mesentry, peritoneum and liver.  As-side from liver condemnations heavy infestation can cause haemorrhages and peritonitis.  Once the sheep has been exposed to tapeworm eggs, it is impossible to prevent the cysts developing so it really is out of our hands.
In order to reduce the risks we ensure that all of our farm dogs are wormed regularly, this is also covered as part of our Farm Assurance.  We must insure that all visiting dogs are also wormed appropriately, using the correct wormer and using the right dose for weight of the dog.  (Please see your vets about specific products)
With over 40Km of footpaths, bridleways and permissive paths on the farm, many of which run through our grazing pastures it is so important for you, the dog walking public, to make sure your dog doesn't contribute to this potential threat to the welfare of our sheep flock.
These two problems in 2009 cost the English sheep industry £7.5 million (EBLEX Lamb briefing 10/07).
Posted by Jake Freestone at 16:17 No comments:

At the moment we feel slightly under siege from night-time mountain bikers. They come hurtling down the hill, with lights so bright, that they are illegal to use on the road, often not slowing down for anybody or any thing.

One of the routes they have been using is actually a footpath, which by the nature of its name (and the law) is for pedestrians (and mobility vehicles) only. We have had to go as far as putting in a chicane to try and slow down these cyclists before our sheep fencing, on a footpath that they're not even supposed to be on!
There is also the disturbance to wildlife and the farm livestock, which ever path they are on. Now I can see the attraction to this sport; speed, mud, danger, but please if you are going to take part, make the right choice and follow the legal pathway.
Posted using BlogPress from my iPhone
Posted by Jake Freestone at 17:06 No comments:

Pears for your Heirs

Last ﻿week we started our programme of fruit tree pruning in the Conderton Orchard under our Higher Level Stewardship Scheme Capital works programme.  The orchard has had little attention for a number of years and the trees are very old and fragile, but really in need of some TLC to preserve their lives (and as a habitat) for as long as possible.  As this orchard is being used by COCO (Conderton and Overbury Community Orchard) I though that we would target those trees that were potentially unsafe and those that were already dead. 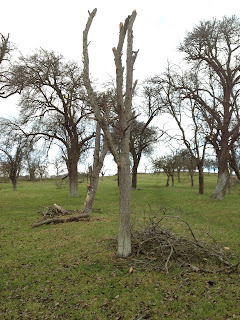 After the dead trees had been re-modelled, the timber that was cut off, was left next to the trees. This meant that it would continue to provide a habitat for bugs, insects, beetles and fungi that were already present in the wood.  This re-modelling was aimed at making the trees more stable in high winds so that they would remain upright as long as possible.  Where wood was removed, say from a branch leaning right over, the stump was trimmed with a 'Coronete' cut to make it easier for insects to access the dead wood, as shown below. 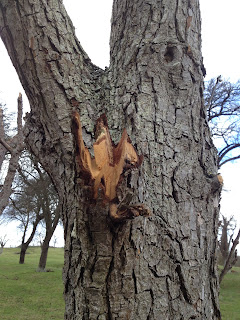 After the most urgent trees were trimmed up Tim and Simon from Treeessence (who did our pollarding earlier in the year)﻿, moved on to some of the living trees.  Again we were targeting those that had lots of top growth making them vulnerable to wind damage.  We have done 50 trees this year and we have the same amount to do for the next 4 years, so we should re-invigorate the orchard over this time scale.  It really is a great project to be involved with.  In the New Year we will be helping COCO plant some Perry Pears to provide fruit and wildlife for all of our heirs. 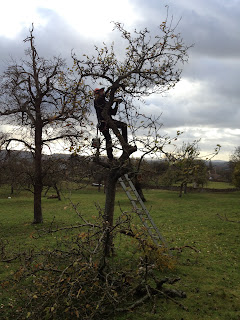 Posted by Jake Freestone at 09:18 No comments: 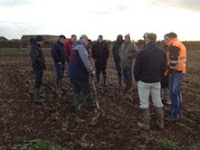 On Friday 10th December I was invited by UAP to go and listen to a talk all about Direct Drilling and Minimum Tillage.  The talk was being give by Steve Townsend who runs a company called Soil First Farming.  It was a really interesting and very though provoking, basically challenging us to rethink our philosophy on cultivation strategies across the different soil types on the farm.
The morning started in the classroom exploring soil and what it is made up of, sand, silt, clay with a few rocks thrown in on our hill and how these particles interact with each other and what we do to them when we cultivate.  The best soils, and our best assets as farmers, contain 25% air, 25% water, 5 % organic matter and 45 % minerals (sand, clay and silt).  Much of the morning was talking about carbon and how we can alter and increase the amount in the soil.  Carbon is contained in crop residue and dead soil bacteria, fungi, worms etc and how do we increase those levels in the soil?  We spoke about cover crops, between winter and spring crops, like beans, oats, mustard even peas.  These crops would feed the soil organisms when they die and lock up nutrients, to be stored for later crops.  This seems really logical to me as it will not only increase the soil organic matter but reduce the risks of soil washing off down the hill during periods of heavy rain through the winter.  We'll be trying that next summer!

In the field we looked at soil structure, digging down to find the anaerobic layer (where last years crop residues remain uneaten by the soil microbes.  We looked for evidence of worm activity, worm casts on the surface and worm tubes through the soil.  These are very helpful to farmers as they allow water to seep through the soil profile but also provide routes for roots, heading down in search of water.  We looked at cultivation depth, anything over 4" was too deep, (as long as there is no soil compaction that the roots of the crop can't deal with).  A root can exhort the downward pressure of 200-300 psi when growing through the soil.  Ideally cultivating at no more than 3" will increase the worm population, keep the trash on the surface and speed up cultivations.  Again another point to experiment with next summer.  We talked about weed control and reducing fertiliser applications, about straw incorporation and stale seedbeds, as I said earlier it was a very interesting day. 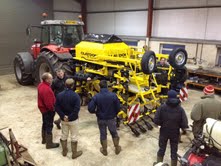 Finally we headed back to the farm workshop to have a look at Chris's new direct drill.  We have been dipping our toes into different direct drilling techniques this summer so it was good to hear someone Eese's experiences.  I went away with two main targets that I will be putting into practise, firstly, getting more organic matter into the soil and secondly making better use of cover crops where we are growing crops in the spring.
Posted by Jake Freestone at 14:18 No comments: 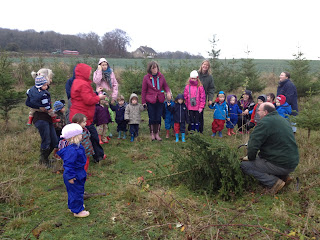 On Tuesday this week we had a visit from Overbury Grasshoppers our local village nursery.  We took them up on a tractor and trailer to our small patch of Christmas trees for them to select one for their nursery.  They wanted a little 4 ft one that was nice and bushy!  Derek wielded the saw and in a flash it was down.  After the tree was loaded up into the trailer, along with the children, we headed off for a ride further up the hill to look at the Elm tree we planted a year ago. 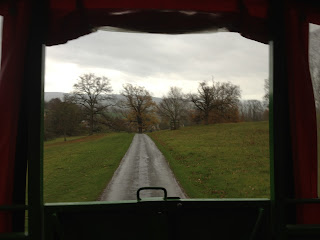 This was the view form the back of the trailer on a rather squally showery day.  The Elm tree was 3m tall and the trunk was 11cm wide at about 1m high.  It still had lots of growing to do.  The children learnt a little about every green trees and deciduous trees.  Then it back to the nursery to warm up and dry out a little.  They all had a great morning, although I think  the highlight was the tractor and trailer ride.
Posted by Jake Freestone at 18:03 No comments: