A little Help From Big Sista! 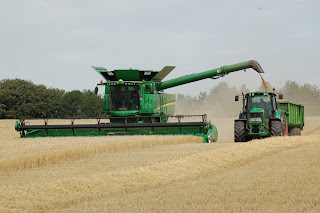 Our run of good weather has finally come to an end and so allows me to tell you a little about some exciting new machinery.  We have actually cut something every day since the 20th July which in itself is quite a record for the past few summers.  Where have the weeks of sunshine I seem to remember from my youth gone too or am I looking back through rose tinted glasses?  Those 'combine connoisseur's' among you will notice that this is not our usual combine harvester cutting winter barley on Bredon Hill.  John Deere are in the process of launching a new range of combines, built in Europe for the high output combines on larger farms and they wanted an area of crop to check the machine out and to make sure there were no teething problems.  We happened to be cutting our malting barley for Carling, which was going very slowly with our combine so we jumped at the chance to try the new machine and give her a work out! 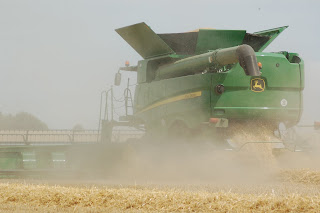 The output was amazing and showed how technology moves on very quickly.  Our machine is only 4 years old and was easily out performed in a difficult crop to combine.  The forward speed was 5-6kph instead of ours at 3kph.  The header on the new combine was also bigger at a whopping 35 feet with belts presenting the crop to the combine very uniformally.  There were very few losses and much less than our combine in the straw swath.  These losses are grains that can't be shaken from the straw and so are lost back to field.  These are called volunteers in the following crop that need to be sprayed/cultivated out later on.  The grain tank held a full trailer load about 25%  larger than ours.  Fuel efficiency is roughly about the same as ours for the acreage cut. 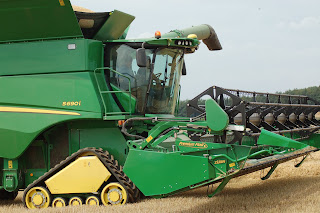 This model also came with track's in place of the larger front wheels which will help reduce the transport width (3.5m) of the machine and also reduce the compaction of the heavy machine on the soft soil.  Grip would also be helped climbing up and down our hill.  But what is the cost and will that cost be justified?  More harvest updates can be seen at No1FarmerJake where I am uploading a daily video tracking our harvest, as it happens!
Posted by Jake Freestone at 13:46 No comments: