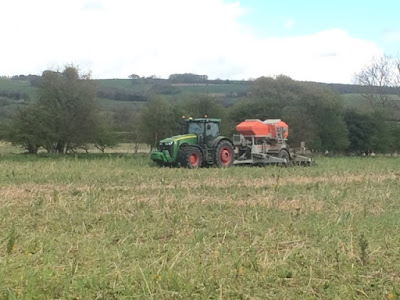 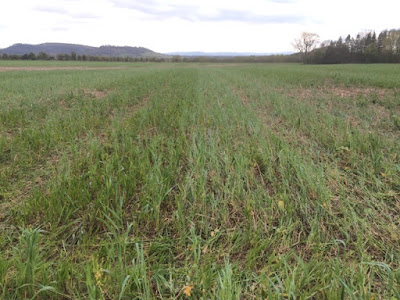 As a result of the cooler temperatures and a wetter start to the year;  Every month since January has been 30% wetter than our 25 year average.  As a result we have
had to be very patient to wait for the right ground conditions before we could start planting our spring crops. 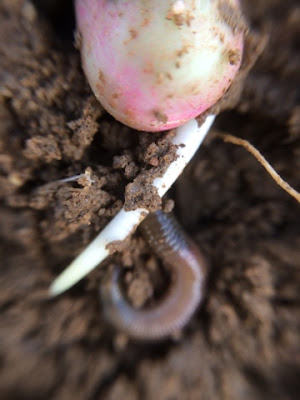 Barley started on the 23rd March when soil temperatures were rising but the peas really had to wait until we had a constant 10 degrees soil temperature so that they could be planted and emerge very quickly.  This field was planted on the 25th April, on light sandy soil, into brilliant conditions.  The cover crop was a mixture of oil radish and oats which survived the winter and really had started to grow.  The peas germinated within 5 days and this picture was taken at that point and shows the young root just emerging from the seed.  The pink colour is a fungicide to stop disease slowing the growth of the plant in the very early stages.  As you can see from the photograph the cover crop and the use of zero tillage (or direct drilling) has really helped the survival of earthworms in the soil partly through not disturbing their habitat, through cultivations, but also through providing them with a food source through the winter.

So the crop is off to a good start so we will see how the season goes and how many tonnes of mushy peas will be harvested later in the year.