There is so much public awareness of the perceived issues with Glyphostate at the moment even though 3300 studies have shown it to be a very benign chemical when used correctly in the field.  With any potential restriction on its use being enforced on us I wanted to have a look at an alternative method of killing a cover crop before we plant our harvestable, or cash crop, into the field.  To me a cover crop can only enhance the soil and the wider environment.  It shields the soil from rain, reducing runoff and erosion; it feeds the soil biology with carbohydrates and encourages the development of below ground microbial populations; provides winter feed for our sheep; increases soil organic matter to hold more nutrients and water-its a no brainier for the farm and the wider environment.
Without glyphosate the termination, or killing, of these crops could prove to be very tricky in our maritime climate.  The cover crop can grow rather large and I don't want to have endless passes with toppers or cultivators to kill the cover crops.  Doing this is expensive, uses fossil fuel and releases CO2, cultivations mean even more CO2 released from the organic matter held in the soil, as it is exposed to oxygen, it means more tractors on the land, causing compaction where they drive which can lead to poorer water infiltration and therefore soil erosion.  So what's an alternative?

With a loan of a crimper roller from Cotswold Grass Seeds (thank you) we had a little play in a large cover crop of black oats, vetch, phacelia and berceem clover.

The idea of the crimper roller is to lay the plants down and squash the stems with metal blades in the hope that this bends or cuts the stems stopping nutrients getting up the stem into the top of the plants, end result being the killing of the cover crop, and any nests or wildlife that gets in the way-but we'll gloss over that for now!
We tried the crimper roller on the back of a tractor at first and drove in reverse to make the chevrons point in the right direction but ended up going in round in circles!  So we unhitched the weights from the front linkage of another tractor and set off across the field at 10kph, with the crimper on the front with a bit more success!  The roller weighed in at 620Kg for a 2m machine so about 310kg/m.

I came back to the plot 7 days later to see if it had actually worked and I am sorry to say that it didn't. The oats seems to still be alive and the vetch, which I though would have been totally animated, were still just about hanging on.  The concern for me is we need to find something that works consistently every year and as every season if different.  We need to grow significant levels amounts of green matter and these need killing-somehow.

Maybe we used the wrong machine, maybe at the wrong time  for the plants growth stage,or at the wrong speed or it wasn't heavy enough?  Maybe we need to graze some of the covers down first to weaken then plants?  Maybe it just doesn't work in our climate where we don't always have a frost to follow up and finish off the wounded crop?  Who knows and more work needs to be done, but for now I am not impressed.

For the last 3 years we have been experimenting with companion crops in our oilseed rape fields.  The companions are mainly based around legumes to try and increase the amount of atmospheric nitrogen that we can capture and then make available to our farming system, and why wouldn’t we?  The atmosphere is 76% nitrogen and yet our cereal and brassica plants cannot use any of it.  But legumes can-and they do it very quickly.
For the first time we have been using berseem clover and vetches together, all planted at the same time as the oilseed around the middle of August.  It has amazed me how quickly the seeds geminated and the speed at which they have continued to grow. 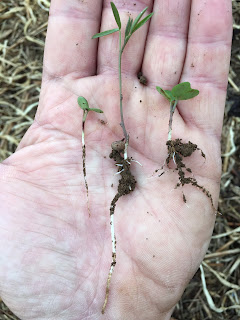 Almost immediately the plants germinated in the no-till soil, where the surface hadn’t dried out and the vetch was soon putting a decent tap root down in to the soil.  This I think has helped the oilseed rape, slightly slower to germinate, by starting to create routes down through the soil in search of nutrients and water.

After 6 weeks I dug up some of the vetch plants to reveal that they had already started to nodulate and the bacteria has started to convert nitrogen from the atmosphere into a plant available form.  This works really well when the soil is aerated, (soil needs oxygen) there is a host and the right bacteria are present in the soil.

The oilseed rape plants look healthy, the weeds have virtually all been competed out and with no broad leaf weed herbicide, 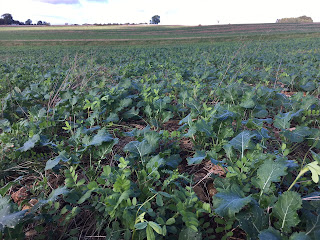 due to the canopy development and we are producing nitrogen for free.  We will see how the companions develop over the winter before they are all terminated, releasing their stash of nitrogen for the oilseed rape plants to use next spring and summer.