Keeping Warm on the Hill! 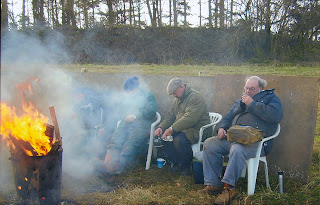 It's been a constant problem on Bredon Hill for centuraries. How to keep warm whilst working, resting or playing? The farm staff have copied the ancient Brittons and resorted to fire, man's best friend, after his dog of coarse. The staff, from right to left, Andrew, Graham, Derek (can tell by the boots) and Gordon, in the smoke, are burning old fence posts, pallets and railings in a bid to keep warm. They have been re-fencing the northern boundry as the old fence has seen much better days. If the field was to remain in set-aside I would not have bothered re-fencing it but due to the removal of set-aside we can now use the field to graze our sheep on and so we must fence it to keep them in. It is a preferable alternative to ploughing it up if you are one of the skylarks that use the field to nest in. I have regularly seen upwards of 20 pairs all nesting in those fields. It does bring a new dimention to the debate about food production verses energy production verses wildlife habitat. Thanks to Fiona for the photograph, it was a long walk to take it!

Posted by Jake Freestone at 09:46 No comments: