Weather to Harvest? That IS The Question 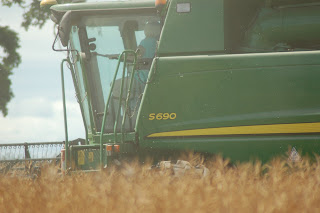 Well, I am a bit late in updating our harvest progress on the blog this year.  We started cutting winter barley on the 12th July on some very light, ex sand and gravel land, according to Tim who drives the combine it was the earliest he can remember starting harvest.  The yield held up well considering the very dry spring that we had.  In the poorest areas of the field the straw was only at 30cm tall!  In a normal year it could be at least 80cm.  The good news is that the people we are growing it for like the sample, it has passed their germination and admixture standards and they are happy to take it away for seed.  It will be cleaned, processed and sold to other farmers as Volume, a winter feed variety.  After the start on barley we had a few days off and then moved into some winter oilseed rape.  The first variety to be harvested was Excalibur and I am staggered with the yield we have been achieving.
The combine has had the yield monitor calibrated with a weighed load, over a local weighbridge, and I am very pleased, actually gobsmacked with the results!  Some of the best fields seem to be averaging about 5T/Ha.  There will obviously be some losses over the cleaner and then through the drier but considering the year and lack of rainfall it is a pleasing start to harvest.
The current problem we are facing is finding crops that are ready to combine.  All of the crops have been dessicated i.e. sprayed off to kill the stems and the leaves.   There is a very precise timing for this and it usually means that harvest can begin in about 18 days after spraying.  I think the cooler weather (prior to now) has meant that the glyphoste has been slow to work on the crops.  The weather is lovely here at the moment and so there is pressure to be cutting something, we still have a lot of crops ahead of us and you never know when the rain willl return. 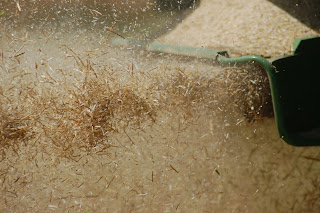 After the grain has been separated, from the straw, leaves, pods and stems in the combine the MOG, (Material Other than Grain) is chopped up at the back of the combine.  This organic matter is then spread over the width of the header (9m) before being incorporated.
Posted by Jake Freestone at 14:09 No comments:

On Monday the 18th July we held the first group meeting of the Overbury and Conderton Orchard Group.  The idea is to bring together interesed members of the two villages to talk about the conservation of the old traditional orchard and to find out if there was any interest in helping with the restoration.  The turnout was terrific, Denzil counted 50 people present and we had a least 2 families that could not make it!  Penelope introduced the evening then John Clarke spoke about his experience with the Kemerton Orchard Group before I spoke about the wider Higher Level Stewardship options that we are embracing on the farm.  Eventaully, it is hoped that the orchard group could become self sufficient in the management of the orchard (complying with the HLS scheme rules-obviously) interacting with the farm's requirements of the orchard, for grazing.
The group will then have the opportunity to develop the conservation within the orchard, looking at erecting bird boxes, bird, plant and moss identification and counting, maybe even having some community bee hives.
It is hoped to organise a follow up meeting, within two weeks to establish a name and committee structure to start leading the plans forward.  I think we will be starting up with a fruit collecting day in September, ready for winter supplies of jiuce and cider, before tree prunning and planting weekend days following up in the winter.  Keep up to date with the development of the group through this blog and the farm facebook page
Posted by Jake Freestone at 13:35 No comments: