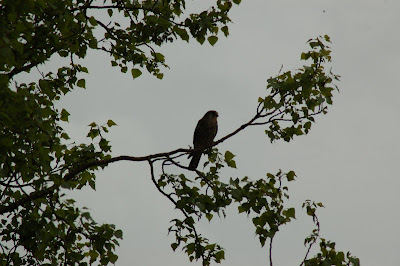 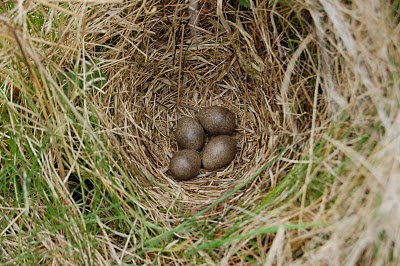 . The walk takes us to 3 areas of the farm, that we walk through about 3 times a year to see what bird species we are able to identify. We are specifically looking for farmland bird species including; skylark, lapwing, yellow hammer, turtle dove, but all species of note are recorded. Today we spotted; skylark, lapwing, reed warblers, black caps, sedge warblers, reed buntings, yellow hammers (on our cultivated margin- result) linnets and a few others. These records should help us in collating information to enhance our HLS (Higher Level Stewardship ) application at the end of May.
Today we had a brilliant find in one of the fields Pamela actually discovered a skylark nest which is amazing. I found one about 5 years ago and have waited to find another since then. We have always had skylark but locating the nests is very rare, so it was a complete joy to find one today and here it is for you to take a peak at. Here is a shot of a lapwing on patrol near a nest in one of the sites we manage specifically for this species, very rare in Worcestershire. 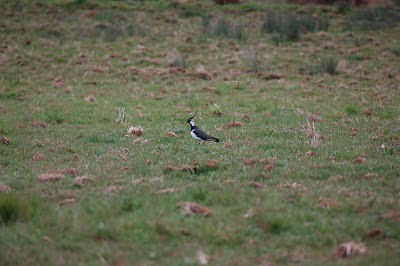 Posted by Jake Freestone at 13:49 No comments:

Posted by Jake Freestone at 11:39 No comments: 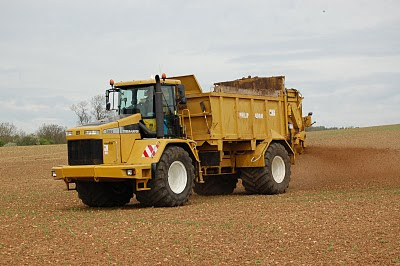 Today we started spreading some poultry litter as an organic manure to provide fertiliser (feed) for the stubble turnip crop that we are going to plant for sheep feed through the summer. The muck was delivered 2 weeks ago and has been sitting in field heaps dotted across the farm waiting to be spread. Today was that day, hopefully just before some nice warm rain (see previous blogs). The spreading contractor, Phil Odam, has just bought this spreader that can weigh each load and apply it very accurately. The spreader has a GPS guidance device which shows where the muck has been spread.

We want to apply about 7tonnes/ha to the fields which will provide enough nitrogen for this crop. 7t /ha is a very small amount and you have to look very hard to actually find it on the surface but it does contain a lot of nitrogen fertiliser of which about 30% is available to the crop straight away. The manure will also provide enough phosphate and potash for this crop and hopefully for the following wheat crop, to be planted in September. It smells a bit but with Derek hot on the heals of the spreading team, working the manure in and planting the seeds, the smell and much of the nitrogen will be captured. Gordon is following behind rolling up. If it rains tomorrow we should be in the pound seats and the sheep should be well fed. You can catch up on this fields progress by coming along to our Open Farm Sunday event on the 13th June this year.

Posted by Jake Freestone at 11:13 No comments:

Where are all the Leverets?

This spring Derek has been ploughing ground in preparation for planting peas over the next few weeks on the brash land at the top of Bredon hill. He commented to me earlier in the week that he hasn't seen many leverets (young hares) this year. Another comment he made was that he was ploughing in the warren field, which is about 50 acres and he was being followed by 21 Buzzards, yes you heard me correctly 21!! That is just over 1 buzzard to the hectare. I think that there might be a link between the two. Obviously the buzzards need to feed on something, were they being attracted by the thoughts of juicy worms, I suspect they were when we are ploughing but what about afterwards? We know that there are fewer rabbits this year, (myxomatosis has killed a lot) so what else do they feed on, the odd vole, or mouse maybe a rat or two but I suspect that a nice young leveret in the middle of an arable field makes a much tastier and easier snack. When do we draw a line under some of these species and say right, we need to start managing them before the balance is turned too far in one direction or another?
Posted by Jake Freestone at 08:59 1 comment: 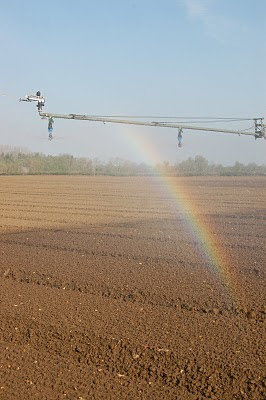 With all of this dry weather we have been asked to start watering the onions. The northerly winds have really dried out the land very quickly, going from muddy wet conditions at the end of March to bone dry conditions in about 3 weeks. These onions were planted about 2 weeks ago and are being watered for the second time already. This watering will help the small seeds to germinate very quickly and there is no real rain on the horizon for at least a week! They are due to be harvested in August. We could really do with some rain, gentle warm rain that is, very soon to help wash in some recently applied fertiliser on the spring barley and to get the grass growing again. The cold nights have also slowed up the grass growth with is not great for the ewes providing milk for the hungry lambs.
Posted by Jake Freestone at 08:32 No comments: 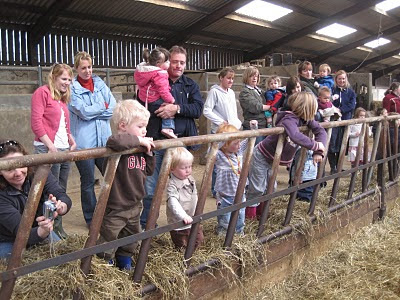 This morning the Overbury Grasshoppers came up to the lambing sheds at Park Farm to see for themselves our sheep lambing. Nearly 30 parents and children had a tractor and trailer ride from the nursery in the warm spring sunshine. They witnessed a lamb being born as well as being shown some older lambs that had been orphaned, lots of bottle feeding followed. If you want to find out more, and see some more pictures do have a look at the grasshoppers blog or website, www.overburygrasshoppers.co.uk
If you are interested in having a look this Sunday (11th April) is our lambing day when tractors and trailers will be taking families from the village hall in Overbury upto Park farm between 10 am and 3pm. There is a £5/adult charge and children go free. there will be lots of other attractions in the village hall for people to look at. More information can be found at www.overburyfarms.co.uk
Posted by Jake Freestone at 13:05 No comments: 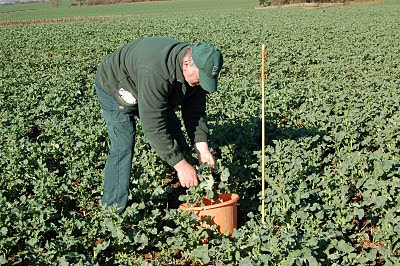 This year we have been using the SOYLsense system to variably apply our Nitrogen fertiliser to the Oilseed Rape and wheat crops. The system uses satalight imagery of the fields to assess the growth of the crop, the Leaf Area Index. We can then use this information to create a plan of each field which will apply different rates of fertiliser across the whole area.

This system needs regular calibration to check that what the satalight sees is actually what is happening on the ground. Yesterday Steve from SOYL came out to sample our wheat and oilseed rape crops to check the imagery. If the image shows a very lush bit of the field, say in a valley bottom, where there is naturally more fertility, we can put less fertiliser on. Similarly, if an area looks very thin then more can be applied. This is helping us apply the expensive fertiliser much more accurately to where each of the areas of the field need variable amounts. The maps are generated in the office and sent to the sprayer on a memory stick. Tim then plugs it in drives to the field and the sprayers GPS system tells the map where it is. The map then tells the sprayer what to put on and off it goes. More infomation can be found at http://www.soyl.co.uk/
Posted by Jake Freestone at 12:51 No comments: