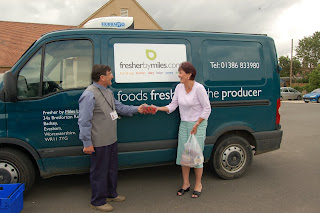 Today saw the second delivery to Overbury from Fresherbymiles! http://www.fresherbymiles.com/ Several customers had ordered over the Internet by Monday midday and were able to collect their locally grown/ produced goods straight from the delivery van! I was one of the lucky ones buying ham, steak, tomatoes, onions, Stilton bread and an array of other exciting nibbles. You know the best bit? I didn't have to travel to Morrison's, Tesco's or Sainsbury's, stand in a queue and be bombarded with offers all trying to extract the last penny from my moth ridden wallet!

I did buy some succulent strawberries from the van. I know the farmer who grew them so all the boxes are ticked; local, fresh, good value and grown on a LEAF farm using the LEAF Marque! http://www.leafuk.org Brilliant! Oh and they tasted terrific as well. Find out more about the tasty strawberries and single varity apple juices at http://www.hayles-fruit-farm.co.uk/
Posted by Jake Freestone at 15:25 No comments: 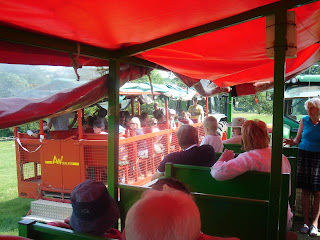 Sunday 10th June saw over 200 people descend on Overbury for an Open Farm Event as part of a national campaign organised by LEAF. We were only one farm out of 400 all doing just that, opening the farm gates and welcoming the general public onto our farms. It is estimated that 50,000 were out on farm on one day. That is still not enough! The new Wembley stadium holds over 80,000 and they just turn out to watch a bunch of overpaid pre-Madonnas' kick a football about and pay handsomely for the privilege!

It was great fun taking people around in tractors and trailers answering questions about crops, sheep, irrigation satellite navigation, bio fuels etc. We were even filmed! Check out http://www.countrychannel.tv/ in the future to see the event! Also look out for 'Getting Your Oats' a programme shot last harvest. Caroline Drummond (Chief Executive Officer) of LEAF also came to the event which was a real pleasure, listening to her talk about LEAF, the charity and the Open Farm Sunday Initiative. Next year it's on the 8th June, put it in your diary NOW!
Posted by Jake Freestone at 14:26 1 comment: