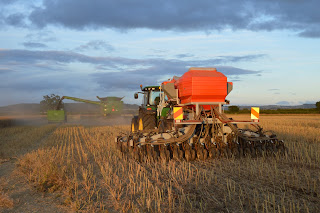 Well after 2 years of trialling and testing, of calculating and studying our Cross Slot drill has finally arrived, imported all the way form New Zealand.  I say finally arrived, it actually arrived in July 2015 but shamefully I have neglected my blog, so here's an update on my latest thinking and plans.

The 5 minute fallow is the first place to start.  The picture above shows the drill planting a cover crop mix directly behind the combine.  Why are we doing this, I hear you ask?  The cover crop plants will stay in the ground after the oilseed rape has been harvested and before we plant wheat in the same field.  The job of the cover crop is to: 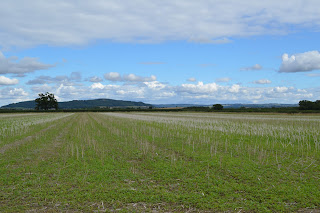 
After the cover crop comes the main crop in the case of the field below, wheat. This picture was taken at the end of October when the crop was about 4 weeks old and shows good even plant establishment with little sign of pest (slug) activity.  The crop, if anything, is a little too thick. 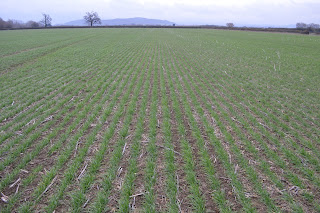 Wheat Planted after Cover Crop
A cover crop is not a "fix all problems in the field from a bag, rather than a chemical container" but it does have a lot of advantages when it comes to improving the soil health and workability of the soil.  It will contribute to increasing OM levels and it will create drainage channels to improve water infiltration into the soil, key when reducing soil erosion and storing more water in the fields, and can help reduce flooding down-stream.  We use cover crops to reduce the exposure of our soils to the elements of wind, sun and water; all of which have massive long term benefits.  I will be back with a follow up blog on dealing with cover crops and getting the next crop established through increased levels of crop residue.