Following our visit to Mike Solari's, Steve and I headed on to a very last minute appointment having seen an article in a farming magazine all about the use of drones in Agriculture.  Neil and his son Mark have been developing remote control drones (helicopters) to help with livestock observations and monitoring on their 446 Ha family farm. When some technical issues have been ironed out this technology is going to be a game changer for livestock and arable farmers, of that I am sure.  So what are the boys up to? 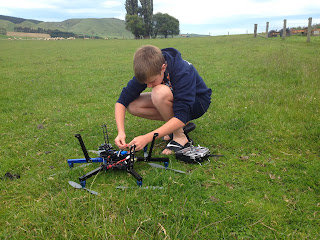 The drone, which can currently fly for 22 minutes has the ability to follow a flight path or as Mark, who’s 13 – (the pilot), calls it ‘the mission’.  Following GPS coordinates the drone can fly out to inspect water troughs to look for leaks and record video footage of any that are currently not working or leaking.  The drone is also able to record its flight paths through a Go-Pro camera which can record what it sees.  This means that video footage of the sheep paddocks can be viewed to count sheep or check for cast sheep or those having difficulty lambing.  The drone flies high enough to not disturb the livestock, which is a massive benefit.  The drone can check the water troughs around the farm in 20 minutes, a task that tasks 2 hours on a quad bike.  Imagine the savings in fuel and labour, all lowering the carbon footprint of the farm.  If an issue is identified then direct action can be taken to go straight to the problem immediately. 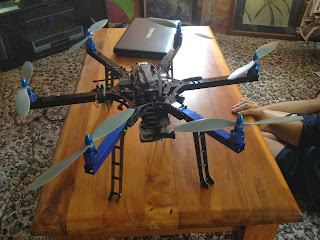 The camera is able to take still images of the paddock and using software developed for counting penguins in Antarctica sheep numbers, including differentiation between ewes and lambs, can be recorded.
Mark and Neil are very confident about the wide range of uses for the equipment.  In an arable situation it could easily be used to monitor leaf area index or crop emergence at the far end of the field, saving time by not having to walk everywhere.  Imagine crop walking 440ha in and hour or so and having recorded footage to monitor immediately or later in the season.  It could be used to check crop emergence or to identify weeds around the paddock.  Leaf area index maps could easily be constructed with farm software to create variable rate fertiliser plans.  Imagine using the drone to round up the cows before milking so they are ready and waiting for you at the cow shed when you turn up having spent an extra half and hour in bed!
From a farm safety angle it could be deployed to round up deer or herd sheep in form the steepest farmland avoiding the need to take a quad bike up onto difficult terrain. The possibilities are endless and it was great to hear the passion and vision that Neil has for the project and it will be very interesting to see what the project evolves into.
Posted by Jake Freestone at 21:26 No comments:

The following morning I set off in search of a world record holder.  Mike Solari currently holds the Guinness Book of Records highest recorded wheat yield in the world.  The record, harvested on the 8th March 2010 was a crop of Einstein, which averaged out at 15.637 t/Ha.
Mike farms with his wife Margaret near Gore in Southland, just down the road from where I stayed the previous night with Peter and Esther.  I met up with Mike, Margaret and Steve Wilkins for a yarn about rotation, wheat varieties, fertilizer, fungicides and how all of these ingredients add up to a record breaking crop. 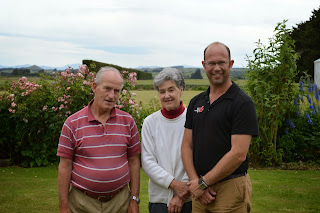 We started off at the very beginning with the rotation which includes a two year grass break to help build organic matter and create soil structure.  Included in this rotation are 3 wheat’s, a spring barley, spring peas winter Oilseed rape and finally a winter barley to get good establishment of the grass ley.  The grassland is now let out to a local farmer who runs ewes and lambs over the whole area for grazing only.  Many of the lambs are finished very quickly, due to the clover in the grass fields especially in the second year.
The soil type is a silt loam over silt and some gravel in places, and the cool climate suits slow grain filling for large crops of wheat.  The natural rainfall, especially summer rainfall, during grain fill maximize the potentially high yields of all crops on the farm.
All of the crop residues are chopped and ploughed in to return organic matter to the soil, which is sub-soiled twice in the rotation before wheat, once after peas and the second time after oilseeds.  Mike is sure that sub-soiling helps to structure the soil, which has the tendency to run together, so no rolling post drilling is allowed. Mike aims to establish a modest plant population of about 100-110 plants in the spring with somewhere near 600ears/m2 and it’s not hard to see where they can come from! 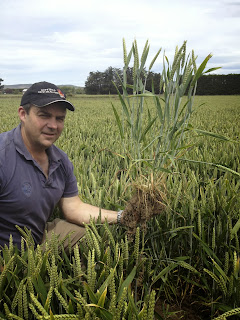 This plant had about 18 tillers, admittedly it was from a slightly below average population but it just goes to show what potential there is for the plants to develop and tiller out with strong viable stems.  The plants are not wasting energy by growing tillers and then aborting them.  If this amount of growth appears above the ground then what are the roots doing to support this growth?
Fertilizer plans are mapped out at the start of the season feeding for expected yield and soil mineral nitrogen samples are taken to monitor the available nitrogen held within the soil.  After the two years of grass there could be as much as 140Kg/ha available to the following wheat crop.  The highest yields have come further into the rotation after the peas though.  A total of 5 applications are used on the crop to steady build the yield through the growing season.  Fertilizer is used as a tiller management tool, when required and Mike will be ruthless in holding back fertiliser until GS 31/32 if there are two many tillers.  Even to the stage of the crops turning yellow with tiller loss. 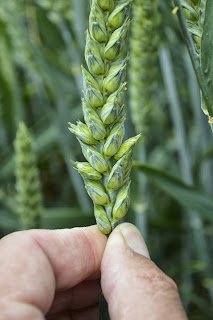 Prolonging the photosynthesis of the plants is also key and keeping disease out of the canopy is of prime concern.  A strong fungicide approach, aimed at septoria control, means that the high yielding crops remain in the field for 51 weeks of the year.  It’s this extended grain fill period, coupled with cool temperatures and good solar interception that Mike is sure accumulates the yield in the crop. 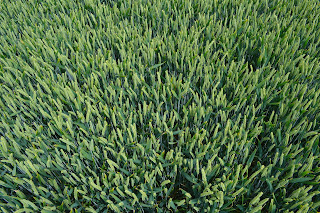 This picture above is one of Mike’s crops of Einstein a variety that obviously does very well on the farm.  Mike’s attention to detail; spending time in the field, the rotation, timeliness of application, forward planning, passion and the love of growing crops all contribute towards a very productive farm with some of the best crops I have seen on this trip.  It was great to finally meet Mike and learn about his farming philosophy, aims and objectives and to see what I can take home to increase not just our wheat crop performance but arable cropping in it’s entirety.

Posted by Jake Freestone at 21:20 No comments: 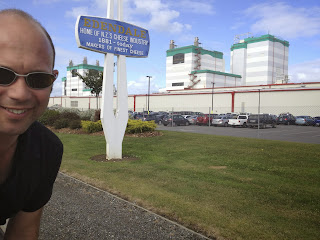 After leaving Invercargill headed out towards Dunedin again and headed through a small town called Edendale.  This is home to one of the largest milk powder plants in the south Island.  The site was huge, with lorry unit's with trailers almost constantly arriving and departing to collect the milk.  The air was sweet withe the smell.  Almost all of the milk powder produced in New Zealand is exported around the world with a fair proportion heading into the Asian market where quality and traceability are of paramount importance.  Fonterra is a farmer owned co-op who is responsible for much of the milk processing, distribution and exporting of NZ milk powder. 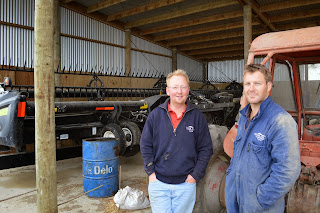 I carried on to meet up with James Roy (right) and Jason Thompson.  James runs the very impressive family farm at Glen Islay with two other properties over a 70Km spread.  The farm at Glen Islay was running around 13-14,000 ewes on high hill country as well as arable land on the lower slopes.  The ewes have only really handled at tail docking time and then again at weaning, until now.  At weaning the first lambs are drawn and sent to the Alliance plant at Lorneville. 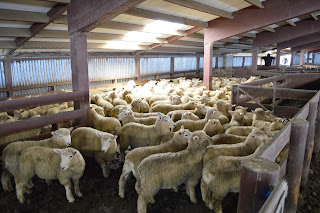 Crops included wheat, barley and oats as a cereal break crop.  Yields of wheat range between 8-14t/ha depending on the slot in the rotation. 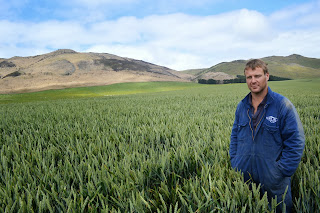 Lots of investment is being made into grain storage and drying.  The bin silos are each capable of storing about 800t of wheat.  The system is effective and simple.  Damper weather at harvest means that its all systems go when the crops are ready to be gathered up, and being this close to the southern coast this makes timing even more crucial. 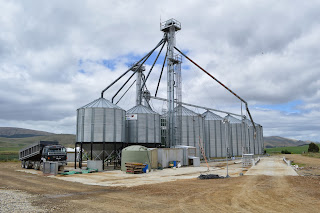 Later in the day I headed across towards James’s cousin Peter Gardyn’s for a farm visit.  Peter was busy weaning ewes and lambs so I jumped in the yute and moved a bunch of ewes away down the farm.  It was great to do some practical faming even if it was just driving the truck. 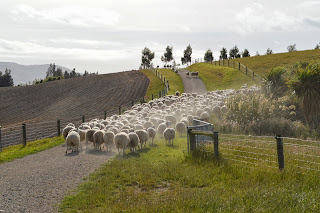 Peter is doing some amazing things to improve the land on the newly purchased farm and increasing it’s productivity.  Land is being drained, creeks fenced off and natural species shelter belts are being planted.  The farm is about 800 acres and carries a fairly high stocking rate, with 3,000 ewes, 650 lambing hoggets., 400 unmated hoggets and 100 head of bull beef.  The farm utilizes clover to a great degree to finish lambs through the spring and summer.  Peter and his father Graham, who runs an animal feed business are also involved in new Oats varieties trials.  The area traditionally grew very good quality Oats for a mill in Gore, before it closed. Now the nearest mill is in Dunedin.  Not much research has been done for a few years and this year a new variety is being multiplied up to sell to other growers. 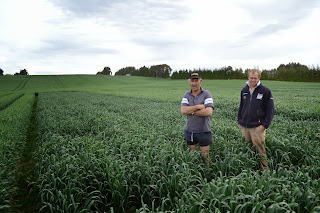 The photograph above is Graham and Peter in the spring oat trials. It was greta to see progressive farmers work withe their customers to push forward new varieties to potentially return a higher margin to the farm and grow better, or suited oats to the customer.  Supply chain integration work well, it was good to see. 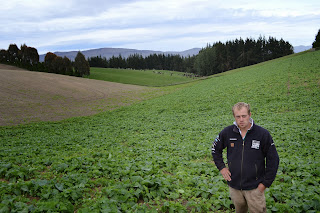 For winter feed the farm utilizes swedes as part of the cross over from grassland to arable rotation.  The grass fields; that could have been in grass for 5 years plus, are then sprayed off, ploughed worked and planted with Swedes in the spring.  Those swedes then provide winter rations for the ewes before returning to the arable rotation of wheat, barley and oats. 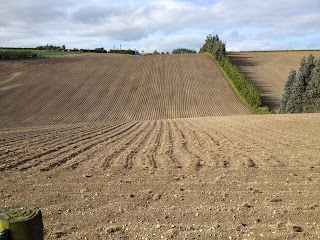 Posted by Jake Freestone at 21:07 No comments: