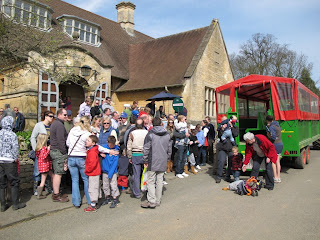 Lambing is here again as as last year we are hosting our annual 'Lambing Live' Event on the 14th April.  It will be great to see lots of people here again as in previous years, there will be so much going on.  The tractor and trailer rides will be leaving the Village Hall in Overbury from 10.00, with the final one leaving at 3pm.  The last one leaves Park Farm to return to the village hall at 4pm so you can spend as much, or as little time in the pens as you like.  Up at Park Farm you will also find our game-keepering team of Paul, Tom and Rod, showing and demonstrating how the conservation and shooting aspects of the farm and hill management work very well together.  Our friends from Countrywide Farmers will also be there with some exciting activities for the younger potential shepherds. 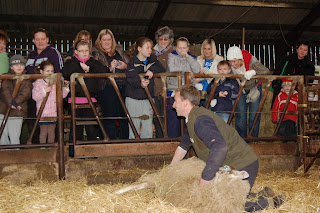 There will be displays and Overbury Lamb Casserole available to buy at the village hall; with proceeds going towards the renovation of the village hall kitchen, a worthy cause.  We only charge adults £5 per person and accompanied children go for free, to attend the sheep sheds by tractor ride.  We must advise that for health and safety reasons we do not allow pregnant ladies to attend the sheep sheds.  For the most up to date information please keep an eye on our Overbury Farms Website or for regular updates you can follow No1FarmerJake on twitter.  Our FaceBook page will also carry information about the event and what you can expect.
With the terrible effect the weather has had on many livestock farms across the north of the country we are supporting the Royal Agricultural Benevolent Institution with collection boxes.  Any donations will be gratefully received and passed on the the charity to use in helping many struggling farmers who have lost many sheep, lambs and cattle in the snow.  I am looking forward to meeting you all at Park Farm, stay tuned all this week for more details of what you can expect to see and do. 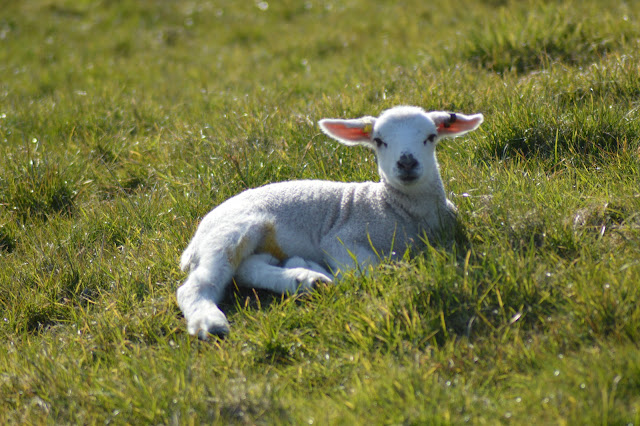 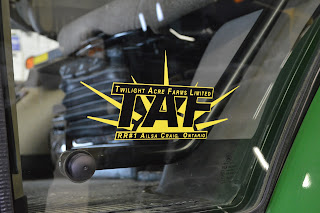 After the Grain Farmers of Ontario March classic I met up with Steve Twynstra who owns a very impressive cash cropping business near Ailsa Craig, situated about 25 minutes drive North West of London Ontario.  Steve's business revolves around soybeans, corn and wheat and is spread over quite a large area surrounding London.
I met Steve at the conference before I hired a car and headed out to meet him at the farm.  The workshop and office where we met were immaculate as was every piece of machinery I could see.  The tractors were polished clean, all the machinery goes through a very thorough process in the workshop through the winter period.  Steve also had 3 lorry units that he uses to haul, grain and fertiliser at certain times of the year.  The size of the equipment was very impressive as well.  A cultivator, similar to a germinator, with tines and rollers with levelling bars was tucked away and was 50' wide (15.25m). 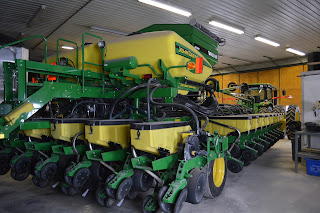 In the last couple of years Steve had put up some very impressive on farm round silo's to hold the crop grown on the farm.  Steve has been using variable rate technology since the mid 1990's and has done a lot of research work on using yield maps to create the variable rate plans. 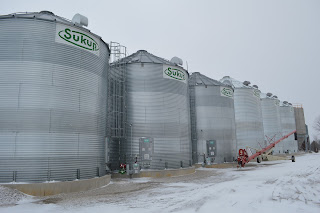 After a lovely dinner cooked by Mrs Twystra (Dianne), Steve and I headed out in the snow in the truck to a neighbours farm.  Here the group meet up once a month to have a general agricultural discussion.  The group started as a marketing group and over time it has morphed into more of a general discussion usually with external speakers in attendance.  This is where I met up with Peter Johnson again and so we talked wheat for the next couple of hours.  I also had a few slides about being a LEAF Demonstration farm so I showed those off as well. 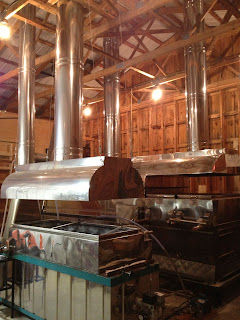 The farm hosting the event also produced maple syrup form the maple trees on the farm.  About 100 acres of trees are tapped each year to produce the sap.  The sap only rises at certain times and needs a specific temperature pattern to get it going.  A cold frosty night should be followed by a warmer day.  The sap is collected and reduced down using wood fires.  The final process uses gas heat so that more control of the temperature can be obtained.  The native Indian population in Canada thought the first settlers how to do this using hollowed out trees filled with sap and then dropping hot fire stones in to remove the water and concentrate the syrup.  The process in reduced by a value of 40.  i.e. 40L of sap is required to make 1L of Maple Syrup! 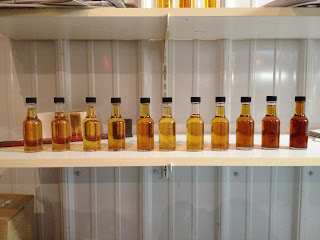 The darkness of the syrup depicts the different amount of flavour.  The darker the colour the more intense the taste.  Different flavours occur during different times of the season, depending on how the sap rises.  It was a fascinating end to another great day.  The next I was on the road, getting up at 3.30 for the 7 hour, 400 mile drive East and then North to Ottawa, Canada's capital city, to meet up with my wife Andrea and daughter Jorja.
Posted by Jake Freestone at 13:06 No comments: 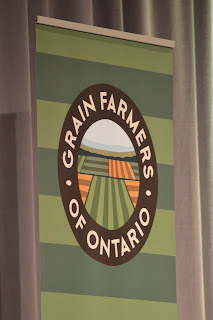 Monday and Tuesday I was very lucky to be included in the Grain Farmers of Ontario March classic.  An event aimed at bring the latest information and some great comedy to grain producers in the region. The event also hosted a trade show with over 50 exhibits from soil sampling to crop breeding and husbandry.  I was met by Crosby Devitt, a Canadian Nuffield Scholar who works for the GFO and who put me in touch with the organisation. The event was top class with speakers covering a range of subjects, but not just agricultural.  I was very impressed to hear stories from Ron MacLean, who hosts a TV show in Canada called 'Hockey Night in Canada'.  As you can imagine he is quite a celebrity and although I haven't seen the TV show the recollection's and stories were very amusing indeed. 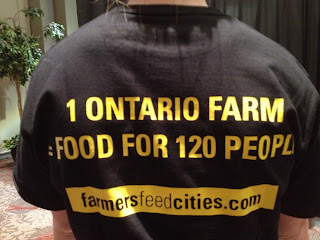 It was great to see support from the catering staff who were serving food and drink through the day.  I particularly like this shirt that states quite clearly the benefits of having a vibrant farming industry on your doorstep, producing quality home grown food. 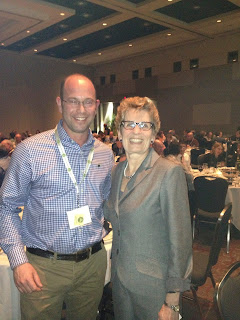 I was also very lucky to be invited to the evening dinner banquet where I had the pleasure of meeting and chatting with the Premier of Ontario and the Minister of Agriculture for Ontario, Kathleen Wynne.  Kathleen had only been in the position for just about a month when I met her; but she realised the importance of agriculture to the economy of the Province, and so took on the Minister of Agriculture role as well.  We'll see how she gets on but made quite an impression on the evening walking round the tables of farmers introducing herself and listening to what they have to say.  Our politicians could learn a lot!  I met lots of interesting people over the two days including Barry Senft the CEO of the Grain farmers on Ontario who spoke to us during the first day of meetings at the CSC.  I also met Peter Johnson who is the Provincial Cereal Specialist and we had a great conversation about growing bigger yields of wheat.  I actually met up with Pete the following day at a local event, more to follow.  You can follow Pete on twitter well worth a look!
Posted by Jake Freestone at 12:47 No comments:

Nuffield Contemporary Scholars Conference - The End of The Beginning 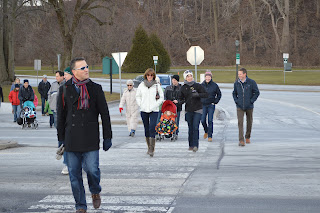 Sunday morning arrived all too quickly after a late night in the bar; continuing  the discussions after Steve Larocque's excellent presentation; dancing, talking and letting our hair down (those of us that have any).  We even got restricted in the bar to one drink per person per hour, but that didn't dampen anybodies spirits.  Over the week I have made some incredible friendships and had some very interesting conversations and discussions about farming, global threats, encouraging new entrants into agriculture, trying to strengthen the appeal of agriculture to our customers and how we can feed people more sustainably.  I have also learnt that other farmers around the whole world are having the same discussion that we are, we are not alone and that by talking about problems, solutions can be found.  Soberingly I also appreciate the small part we, the UK, have to play in the global production of food.  However our part is becoming clearer to me, we need to be more productive, more efficient, more environmentally aware and better linked to our customer, whether that is the supermarket selling our lamb or the flour miller grinding the wheat that we grow.  Just the right time for my study topic, 20T/ha in 20 Years time, Fact or Fiction? 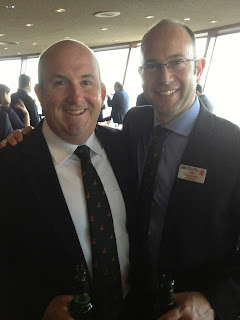 I also have 78 new best friends.  You might think that is impossible after only a week, but I know that if I wanted to go and visit any of the #Nuffield13 scholars doors would be wide open in all four corners of the globe and that is something very special.  Of course that is mirrored here at Overbury.  The washing machine will be maintained regularly to make sure it's ready to be pressed into service.
It really was a great week and one that will stay with me forever.  I know that we all felt the same way, and it was hard to say good bye to everyone; assuming that, as a group, we will probably never be together again.  There will be reunions from time to time but I sadly doubt all of us will be together again.
For some it was on with the Global Focus Group Tour, something I plan to do in the future.  Blake Vince (above) from Ontario is part of that group who headed to Washington DC very early on Sunday morning to continue the 7 week world tour.  Next week (8th April) they are in the UK so we'll meet up again, which will be fantastic to hear their stories from California and Brazil, having seen some facebook pictures and comments.
For others it was heading back to Toronto airport and back to the UK, but for me; I headed North West with Karen Daynard (CDN), Julian Raine (NZ) and Karen Brosnan (IRE) back to Guelph. 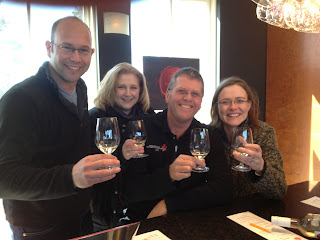 We stopped along the way at Sue-Anne Staff's winery, you could say for 'one for the road' and then after dropping Julian and Karen along the way, Karen (CDN- next to me) headed to her parents house. Terry and Dot Daynard had very kindly offered to put me up for the night. 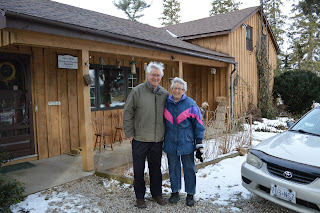 I have to say it was a great feeling to be in a proper home and not living out of a suitcase for a change.  Terry and Dot cooked a lovely meal (on the BBQ in the snow, proper Canadian's) and we were joined by Karen and her sister Kelly, who spoke earlier in the week on social media.  After a great nights sleep and Dot doing some washing for me (thank you so much), we had a look around the farm buildings and the outside corn store 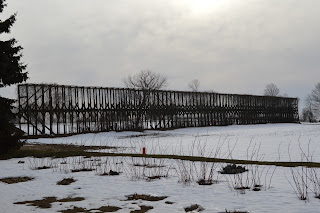 which was used to store corn (maize) on the cob over winter.  The cold dry air would keep the crop safe gradually drying it out over the winter before it was sold.  Terry and Dot showed me some pictures of the store being filled.  In a dry year the cobs would flow easily up the elevator but if they were wet almost every one had to be prodded up into store. We also has a sneaky peak around the machinery shed and saw this little beauty.. 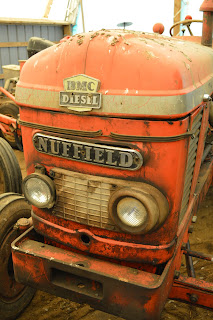 tucked away.  I guess it was a sign, once entangled in the Nuffield world there is no escaping!

Posted by Jake Freestone at 08:50 No comments: