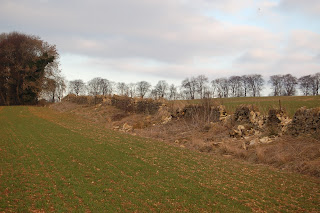 One of the really great aspects of our Higher Level Stewardship agreement is the additional help and funding to repair some of our worst stone walls.  Many of the walls were erected in the 1920's during the great depression, where labour was cheap and the raw materials were available within the fields or dug up from the on farm quarries.  Now after nearly 100 years of rain, snow, frost and sunshine damage some are really starting to show their age and in need of repair. The frost damage really causes the damage where the walls sag and can't shed the water allowing it to seep into the centre of the wall where is freezes and thaws, gradually causing the stones to crumble and the wall to collapse. 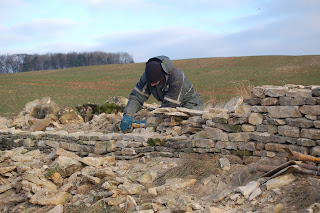 Stone walling is a very skilled and papainstakingly slow operation hence the large costs involved in restoration.  A typical wall, if you are using a proportion of new stone will cost somewhere in the region of £100/meter.  This would include the toppers and the top wire used to try and keep the deer from leaping over the wall knocking it down.  Our walls are being repaired by Matthew Fergyson who is based at Guiting Power.  This is Nathan, who works with Matthew, who has stripped down a section of wall and is now rebuilding it.  The almost final result is shown below, (minus the top wires) 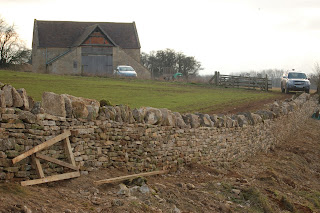 For those of yo who regularly walk on Bredon Hill this wall is located near Sundial barn, shown above.   The wall is about 450m long and runs along side a public footpath, so you are welcome to go and see the progress for yourselves.  You might even give Matthew and Nathan some encouragement as they are there is all weathers!
Posted by Jake Freestone at 08:43 No comments:

Chinese Lantern on the Loose 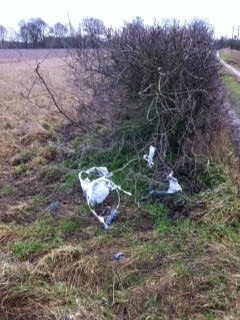 The farm seems to under constant aerial bombardment at the moment from falling debris!  After New Year I picked up 12 Chinese lanterns and I am still finding them dotted around the farm.  Is there a difference between a lantern and a fast food drinks can or an emptied car ash tray tipped out in a gateway littering the countryside (fined if you are caught)?  I don't think so! There is also the problem of animal welfare especially livestock.  The metal support holding the lantern together  is not degradable and can easily be picked up by a sheep's leg or worse, get wrapped around a neck of an inquisitive beast. There is always the risk that they will land in a silage field, be chopped up and then consumed later in the year causing potential death.  Don't forget we share this countryside with deer, badgers and foxes and if they get tangled up in the metal work there is no-one to cut them free.  There is also a very real fire risk should they land before the flame goes out, maybe in a hay barn or on a stubble field, or even on someones thatched roof.
Even if the body of the lantern is biodegradable, how long will it take and do we  therefore have to look at the mess slowly decomposing over the months?  I appreciate that they are a spectacular sight in the night sky but the risks far out weigh the brief moment of splendour, especially if you happen to be the animal that ingests the metal! So please think again before purchasing them and spare a thought for the consequences that may follow on.
Posted by Jake Freestone at 11:08 No comments: 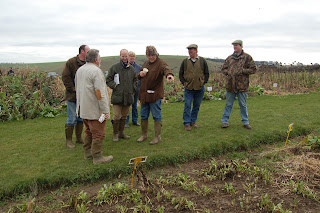 Today Paul Gillet and I went to see some game cover and stewardship seed mixtures ﻿sold by David Bright Seeds  Paul is the Head Keeper at Overbury and together we wanted to go down and have a look at different mixes of seed after the hard winter weather we have been having.  This would help us determine if there are any new varieties or species we should be trying that will stand up better to the cold weather.
Much of the grain maize was still standing, as was the cobless maize but much of the forage maize was flat.  We looked at varieties of sorghum, millet (red and white), kale, mustard, turnips and a host of other species of planted, all designed to either feed or provide cover (shelter) for game birds, with benefits to other species. 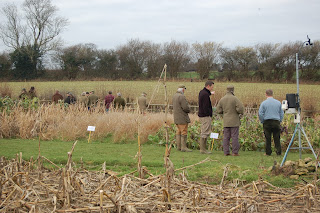 Having just been accepted into the Higher Level Stewardship Scheme, I was keen to look at different seed mixtures aimed at providing feed and cover for our 6 target wild birds (Grey Partridge, Lapwing, Turtle-dove, Skylark, Yellow Wagtail and Trees sparrow).  We saw mixes for yellow hammer and tree sparrow, both of which we have tried here at Overbury, containing mustard, mixed millet, spring wheat, spring barley and fodder raddish.  Lots to think about and plan for ready for planting this spring.
Posted by Jake Freestone at 18:27 No comments: 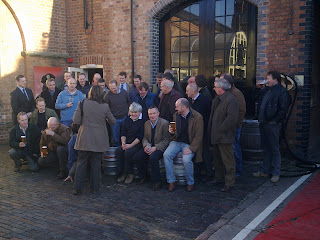 Yesterday I travelled up with James Cox, (2010 Malting Barley grower of the Year) to Burton-on-Trent to the annual meeting of the Carling Western Growers Group (CWGG).   The group of over 70 farmers supplies about 20,000t of malting barley every year to Molson Coors The barley is used to provide malt for Carling Beer and we feature heavily as a group in their 100% British Barley campaign of which we are very proud to be associated.

One of the benefits to being part of this club is the knowledge that our produce, which we spend hours planning for, growing, harvesting and storing are going to a  known home and one as popular as Carling.  There are other benefits as well; being able to share knowledge about growing the crop more efficiently and therefore reducing the carbon footprint (also through the whole supply chain), preferential harvest treatment and having a direct link with the maltster and discussing, one to one, the intricate points of malting barley.  The session concluded with a forward look at the corporate responsibilities and the contract for the next 3 (or so) years of barley supply.  Everyone left with a positive feel about the group and what it can provide our customer with going forward, and it wasn't caused by the complimentary C2 Beer
Posted by Jake Freestone at 17:49 No comments:

Some good news to share with you all in the New Year.  Our Entry and Higher Level Stewardship application seems to have ticked all of the right boxes and has been given a January 1st 2011 start date.  From this moment we are putting the scheme into operation.  It is a great challenge but it will be so rewarding, not just for us, but for the people that visit our farm, those that walk on Bredon Hill and also for the wildlife we can support, attract and encourage.  I hope that the visitors and walkers will be able to appreciate what we are doing and play their part by keeping to the public rights of way and following the countryside code
A huge thank you to the organizations that lobbied on our behalf, those at FWAG and LEAF the NFU and the CLA also Farmers Weekly for their write up in the 29th October edition.  I would also like to thank Harriet Baldwin MP and Jim Paice MP for their support.  The only omission from our scheme is the removal of funding for our educational access visits and the open access.  These are two areas that really need support to encourage people to learn about their food, farming and the countryside on which we depend on for our living.
So it's full steam ahead, and as of this moment we have started work on our Orchard Management Plan.  Rob Howells our local FWAG Farm Conservation Officer has started mapping and categorizing the trees currently in place.  From this survey we will be able to work out a plan for planting and pruning over the next 5 years.  Later this year we will start to identify those trees and if possible start replanting trees next winter. 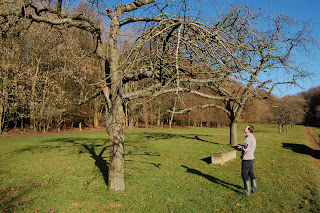 Here is Rob in the Cherry Orchard assessing the condition of some very old Cherry trees that could someday soon be some of the first trees to be restored under our High Level Stewardship agreement.
Posted by Jake Freestone at 17:40 No comments:

Firstly I would like to wish all followers of Farmer Jake a Happy New Year and may this be an exciting and prosperous one for all sectors of the agricultural community. 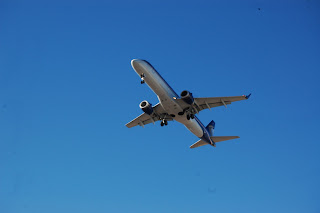 Last week I had the pleasure of heading down to the wild south west of the USA, near Phoenix (Arizona) to be exact to have a look at rather interesting bits of machinery.  The flight out was direct from Heathrow and took nearly 12 hours from take-off to clear customs.  I can't believe that they only had three booth's open in customs to serve a jumbo jet with nearly 400 people on board! 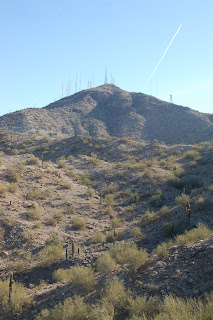 On day two we stopped on the outskirts of Phoenix to survey the city and it is vast.  From the vantage point here we couldn't see either end of the city.  Not a particularly high rise area, even 'downtown' just a sprawling metropolis with fields of farmland as green islands between the concrete expanse.  These areas still farmed from underground water supply by the farmers who didn't want to sell for houses!  If water could reach it it would be farmed.   Much of the water used here is from underground or borehole water that has seeped down from the rocky mountains. 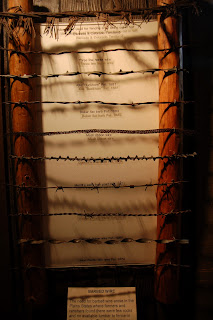 We visited a museum while we were staying out in the desert and found out that historically each of the land owners would have had their own brand of barbed wire so that people could identify who's land they were on.  They were very intricate and would have taken an age to put together, some didn't even seem to have much of a barb on them at all. 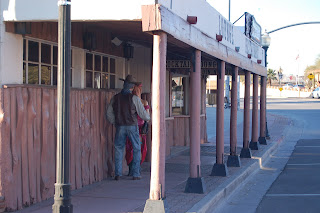 The high street in the small town we stayed in could have been taken from a western movie set, with small saloons and cacti bordering the, less than, main road.  Roll up the tarmac and tie up your horse, it really could have been 1851 not 2011.  There was quite a lot going on for a sleepy town, but at the heart of it was still the rodeo and the cowboy way of life (oh and the fast food outlets...), evident in the trucks driving around branded with stickers and the leather shops selling boots, stetsons and saddles.
Although the trip was short, only 5 days in total, we had a great time and a big thank you to our hosts for looking after us so well.  At the moment I can't really say too much more about what we were doing but who knows maybe in the future there will be an opportunity to let you all into the little secret!  Watch this space.... 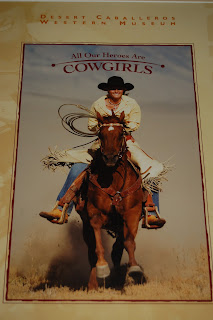 Posted by Jake Freestone at 12:24 No comments: