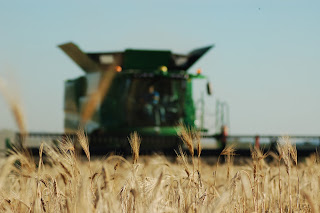 Yesterday we started combining!  It was 9 days later than last year but a much more traditional start date for us on the winter barley.  It is usually a toss up between barley or rape but this year the barley gets the nod and gets combined first.  We started with the hybrid barley for seed, a variety called Bamboo, grown under contract to Syngenta.  The crop is laid out in the field with a male strip around the boundary to act as a pollen buffer and with 6% inclusion of male in the centre (female) part of the field to actually pollinate the crop.  It is very critical for us to have good weather, dry and windy, during pollination, which occurred at the start of June this year when the weather wasn't too bad, so the seed set and therefore yield will hopefully be OK.  We still have to calibrate the combine yield monitor which can then give us an accurate harvested yield. 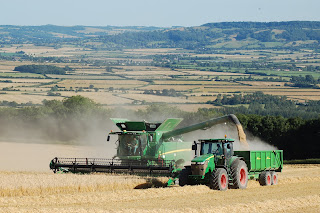 Following on from the Bamboo we started on the Cassata malting barley, grown under contract with Molson Coors (then into Carling and Worthington).  The very warm weather has really ripped the crop quickly and the grain has a moisture content of about 12.5%, much less than the 16% moisture, we can move it at.  This is good news for us as we don't have the dry the crop, burning expensive gas oil.  On the down side it makes the crop vulnerable to cracking and splitting when being harvested, so every care is taken not to thrash the straw too hard, damaging the germination of the grain.  If it won't germinate then it can't be used for malting so it has to go as animal feed.  Samples were taken this afternoon and set of for analysis, we should know the results in the morning, so fingers crossed.  If you want to keep up to date with this years harvest do follow on you tube No1FarmerJake
Posted by Jake Freestone at 18:06 No comments: