NIABTAG Visit to the Gene Pool 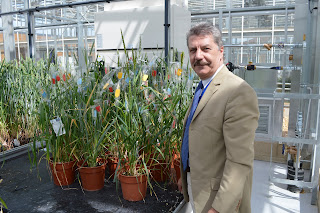 Monday the 13th May was another day to remember on my Nuffield adventure.  My visit was to the HQ of NIABTAG near Cambridge, who just the evening before had been on Countryfile with a brand new development in wheat breeding!  I was met by Bill Clarke, to whom I am very grateful, he spent at least 3 hours showing me around the site and detailing the very valuable work that is being undertaken at the centre.  Bill explained about NIAB, what it does with the recommended lists, the Innovation farms and the wider extension work to the farmer members.  The membership only make up about 10% of the income stream, with the balance being from commercial work or contract work from industry or the BBSRC.  We spoke about wheat growing and the challenges that we face trying to produce more from less, with less.  How is that supposed to happen we can't work miracles, especially when you look at the potential to ban some or all triazoles from the fungicide battle. 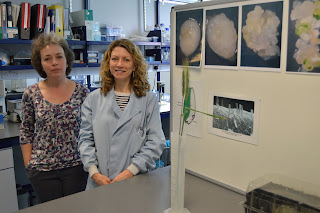 Something that does resemble a kind of miracle is the work that Sarah and Emma are doing in the labs to multiply up the engineered seeds.  It was fascinating to hear them speak with such knowledge and passion about a subject that is quite alien to me and so very specialised.  It's great to know that people like this our working on our behalf making our industry better and more productive. 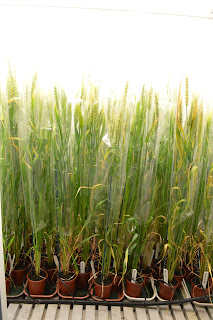 It was a great visit and I was allowed to see first hand the stages that went into the creation of the synthetic wheat featured on Country File the previous day, demonstrating a potential yield increase of up to 30 % over our existing varieties.  Although the work is a long way from becoming available on the farm, the genetic engineers and plant breeders are working hard to help feed our growing world population, of that I am sure.
Posted by Jake Freestone at 15:37 No comments: 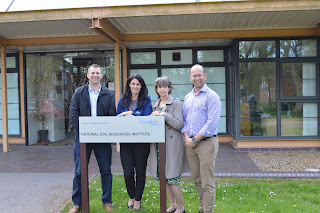 I can't believe where the last month has disappeared too. After Canada, lambing day and the spring work on the farm, things sure have been very busy.  Last week we hosted Natasha King, a 2013 Nuffield Scholar, who we met in Canada.  So as I was heading to Cranfield University with Tom Sewell to meet Professor Jane Rickson, Natasha came along as well.  After half a days crop walking with Dominic the day before, we were slowly converting this Kiwi to a life alongside dairy cows!
The day at Cranfield was fantastic, Jane looked after us really well and lined up a great line of people available to tell us about he various areas of research they were undertaking.  Karl Ritz was able to host for a while after lunch which was fascinating, to hear his thoughts on where arable cropping could be heading.  We mused about mixed cropping in the same field, seed mixtures not just of different varieties but also of different crop types.  In the past livestock farmers could have grown peas and spring barley together as a whole crop, baled and fed to livestock.  Karl was talking about harvesting these mixes and then selling it as a blend or separating it out in the grain store.   It would be very interesting to hear the industries views of segregation of different crops or selling blends.  Does it matter for instance if a group 1 milling wheat is a mixture of Crusoe, Solstice and Gallant if it all makes the specification, but requires less fungicides, with the same yield?  I guess these are things that organic farmers use to try and make sure 2/3rds of the crop survives a fungal attack.  Maybe now is the time to slacken off the homogenised world of specifics and go with a more natural diverse scenario? 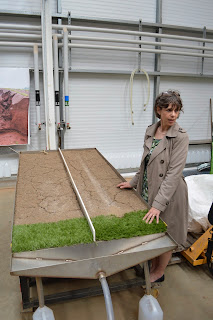 Later in the day Professor Rickson took us to the soil hall which was a tremendous asset to have.  The trays above demonstrate how different soils under cultivation behave in different rainfall events with different topography.  The tray above shows the effect on soil movement of a buffer strip, slope and tramline.  When the water has reached a certain velocity then it moves down the slope taking soil particles (carrying pesticides and fertilisers) with it.  These have been stopped by the grass buffer (right) but can this area act as a reservoir for super pollution during a once in a lifetime rainfall event when the soil particles contained in the buffer strip are washed out of the strip?  A debate for the future, all about the width of your buffer!  It also highlighted Tom's Nuffield topic of direct drilling and some of my previous thoughts, leaving crop residue on the surface through min-till or direct drilling is better for water quality and reduces soil erosion, and that is a fact. 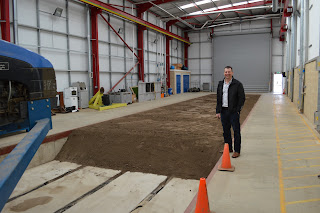 We finally ended up in another area of the building looking at the soil pits that can be used to simulate cultivations and compaction and what can be done to remove or alter these in-field problems.  The facility has the option to get any soil moisture level required, by simply simulating rainfall, which will obviously have an effect on the machinery being tested at any one time.
Again, more questions were asked than answers found, and lots of food for thought, not sure when this diet is going to start!
Posted by Jake Freestone at 22:10 No comments: