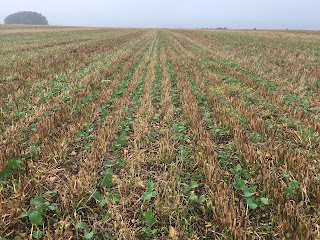 Well what a trying autumn it has been for our oilseed rape crops! 2 years ago the EU restricted the use of, and has subsequently banned neonicotinoid seed dressing on our crops. These insecticide seed dressings were a valuable tool in terms of getting crops established when dealing with a tricky pest called Cabbage Stem Flea Beetle. The insecticide was applied to the seed and when the plant grew the chemical was taken in by the plant. This meant that when the beetle took a bite out of the plant leaves it received a dose of insecticide and died. This meant that we didn't have to spray for the pests when the crop had emerged with an indiscriminate insecticide across the whole field. There are parts of the country where it has become impossible to grow these crops anymore. Why should that be a problem? For several reasons oilseed rape is a very important crop. It enables farmers to have a rotation, growing different crops in the field every year rather than continuous cereals. It's actually pretty profitable, which means we can invest in our farms and the countryside. The oil that it produces is valuable to the country as its turned into bio diesel and vegetable oils, and the yellow flowers are a really important source of pollen and nectar for bees producing honey.
If the UK stopped growing oilseed rape, the grains would still be imported from abroad. Last year 200,000 Tonnes of oilseed rape was imported from Australia, where these chemicals (and others), banned in the EU, are still permitted. So in effect we would be exporting our environmental  conscious abroad. 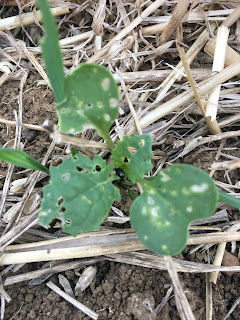 We have learnt a lot from the this years establishment of the crop.  There are a lot of practical, physical tools that we can apply using the principles of IPM (Integrated Pest Management). Drilling date has been key to getting crops established and to have grown at least a true leaf before the beetles attack. The weather and crucially moisture at drilling is key to getting oilseed rape established quickly. Direct drilling helps retain valuable moisture at this key timing for the crop. Placed fertiliser enables a quick get away when the plant starts to grow. High levels of crop residue also help conceal the crop from the beetles, but comes with the added issues of slugs hiding in the straw ready to pounce. For the last 4 years we have been planting companion crops (buckwheat, vetch and clover) to help mask the crop still further. These companions also have benefits of weed suppression and the legumes are able to fix a certain amount of free nitrogen from the atmosphere.
We haven't sprayed any insecticide on the oilseed rape crops this year. Partly because we are trying to farm without using insecticides as we want to encourage our beneficial insects to predate the pests and partly due to the fact that I am not sure exactly how efficient they are due to pest resistance. It seems that they are becoming resistant to the active ingredient so their extended use is probably not justified.
Either way new research is needed to find out more about the pest and how we can manage or disrupt its life cycle. What percentage of the population is resistant? What environmental trigger makes them hatch?  How long is the feeding period for?
These are some of the issues faced on the farm by one crop and one pest. We have a massive challenge to maintain active ingredients that enable us to continue to grow food in the UK. Food sovereignty should be very much at the fore front of the thinking of the population in a post EU world but we will need to tools that will unable us to product this food for an ever increasing population.
Posted by Jake Freestone at 06:56 14 comments: