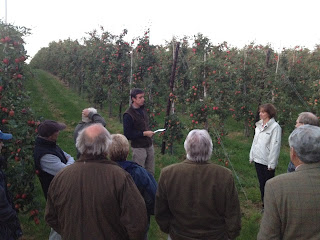 On the 18th September I was treated, along with other members of the Worcestershire NFU, to look around a very special part of Worcestershire.  The 200 acre farm is owned and run by the Capper family; Mark, Richard and Ali, and they are very specialised in growing apples and hops.  These are two crops that I know very little about, so it was a real eye opener being shown around the farm, slightly in the gloom, but never the less, it was an enlightening evening farm walk.
We started in a Gala, eating apple orchard, shown above.  This orchard was planted in 2003 and is on a fairly traditional scale with 12' between the rows and the trees planted 5' apart; being supported on posts and wires.  The apple trade seems as difficult as many other fruit and veg sectors, with prices slow to respond to the ever increasing costs.  In real terms the apples are worth the same price as they were 20 years ago! The apples are sprayed every 7 days with fungicides in order to keep scab off the skins. (purely cosmetic).  The marketing sizes are precise, picked on size and colour.  These apples must have 50% red colour, be just over 55mm in diameter and have the stalks still attached!   Richard and Ali are aiming for 95% in this class 1 to achieve the highest possible price.  That is a tall order and so weather dependant, this year they will be about 10 days behind their harvest schedule due to the cooler summer weather. 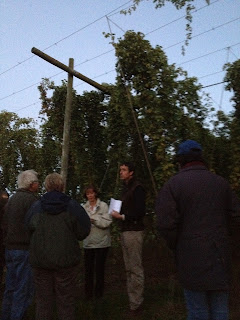 Following on from the Gala orchard we looked at one of the hop fields.  there are only 50 hop growers left in the UK, mainly in Worcestershire, Herefordshire and Kent. The plants are grown over the framework of wires and posts.  These annual plants have a life cycle of about 25 years.  The hop plants are manually strung in April and then need constant training up the wires until they get established.  High winds can blow them off the wires and so the process needs to be repeated! The hops are usually ready to harvest in August and different varieties are grown for different aroma's and alpha acids.  The aroma is what gives flavour to the beer and British varieties (there are over 20), are becoming more and more popular with small micro-brewery's, specialising in niche markets rather then mass produced beers. The strung system of growing hops is very labour intensive with up to 14 people being involved in the harvest.  Each of the bines are cut down and laid on on a trailer before being taken back to the farm where the hops are removed form the vine and dried in a kiln, before being packaged up in sacks, once called pockets. 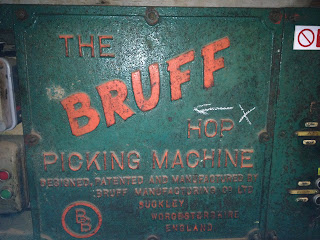 The crop will yield about 8tonnes of fresh material which after drying down to about 10-12% moisture will give a saleable yield of about 1 tonne per acre of hops.  Richard and Ali are also experimenting with growing hedgerow hops, which grow up posts and netting but only to a height of 8'.  These smaller varieties still have the marvellous aroma characteristics but can be harvested by machine, required less fungicides therefore vastly reducing the costs of growing the crop.  The finished crop is stored, before it is sold in the bale.  the longer it's stored the less aromatic it is, so it is important to sell the crop fairly soon after harvest.  Other merchants can then freeze dry or vac pack the hops to retain the aroma for longer. 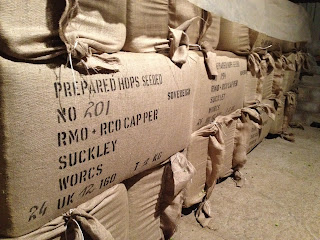 Posted by Jake Freestone at 09:04 No comments:

We Are Now a LEAF Demonstration Farm! 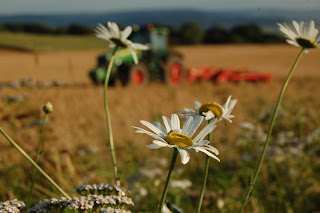 We are delighted to announce that we have been selected to become the latest LEAF (Linking Environment and Farming) Demonstration Farm.  We are joining a very select group of 40 farms around the country and we're very proud to be involved with LEAF at this level, showing our commitment to sustainable farming practicies.  Our official launch date is the 11th October but with invitations arriving as I write, I thought a wider announcement to Farmer Jake followers would be appropriate.
What does being a LEAF Demonstartion Farm (LDF) involve? Well it gives us a perfect opportunity to communicate with our farm visitors and local groups in a structured way how we manage and look after our farmland.
We can demonstrate the long term vision we have for producing sustainable crops and livestock.  We will welcome more people onto our farm to talk about how we farm in conjunction with the 9 principles of Integrated Farm Management and what we are doing to increase the biodiversity on our farm.  Let's not forget though, that we are also here, providing all of this diverse enviornment, in addition to producing food for you and your neighbours to eat.  With food shortages around the world, the pressure for increased production from our limited land base supply will be great.  We have to manage that pressure while still increasing the benefits to the environment in which we live and work. It's by using the IFM principles we can achieve both of these objectives.
Posted by Jake Freestone at 10:51 No comments: 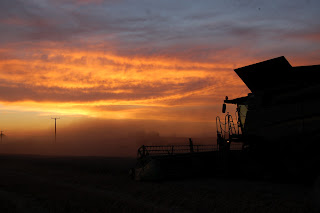 Well harvest was finally wrapped up on Sunday 9th September this year in a very dusty crop of wheat.  The final crops we harvested were very poor yielding with low grain weights that disappointed us all.  There were plenty of ears there but very little grain within and what grain was there didn't fill very well.  I think it was a mixture of lots of different causes this year from the lack of sunlight through the final growing part of the year (June-July); also the very high levels of disease that have plagued the crops though a high rainfall year.  Looking back we were finding septoria in the crop coming through the winter, (which was fairly mid), so there was plenty of innoculum within the crop and then even with a robust fungicide strategy control was poor, with the prolonged wet period.
I guess there were a few high lights to harvest and what it has demonstrated to me is the need to spread the risks around by having different soil types and a proper rotation which allows spring and winter cropping.  The spring barley crops have done well and so far all has been accepted by Molson Coors and the germination has remained good, even with a late harvest.  The oilseed rape has yielded very well considering the year which is encouraging.  I also think that we shouldn't take this year in isolation from a cultivations, cropping or crop protection angle.  I know climate change will through a few curve balls for us to deal with in the future but wouldn't a nice easy harvest make a pleasant change?
Posted by Jake Freestone at 17:26 No comments: