On Monday 16th January Tod, Tia and myself set off heading North West into Wales, our destination was the abattoir in LLanidloes where are lambs are sent to be killed.  The trip up took about 2.5 hours and there was lots of discussion about our sheep flock on the way.  These are the same lambs that feature on YouTube here 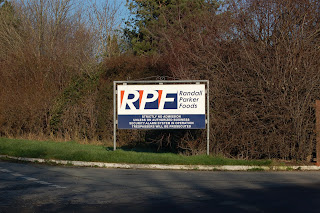 After signing in and getting to reception we were warmly welcomed by Kevin Brown, who id the Procurement Manager and General Assistant manager for the plant who kitted us up in white coats and trousers, hard hats and hair nets.  We started off our trip looking at the vast warren of fridge space where the sheep and beef carcases were being held whilst they came down to temperature, ready to be transported, for lamb this is maximum of 7 degrees C.  Then we moved on through the lines to where the lambs are humanely stunned and killed which was a very swift and skilled job, expertly handled.  Having been skinned and processed, taking away the intestines, hearts, lungs, livers and having some fat trimmed off, we watched our lambs go along the grading line. Here they are weighed and given their grades for fat and conformation.  Most of that batch (of 123) that went through as R3L's and R3H's and averaged 20.91Kg.  In total the group of lambs yielded just over 2.5 Tonnes of meat and bone! 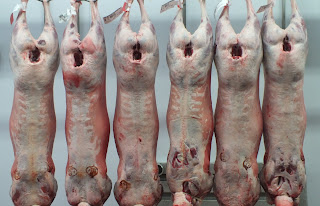 The picture above was taken of our lambs the following day, showing he confirmation and fat coverage really well.

It was a time of mixed emotions really to see our own lambs being killed but I was reassured and happy to see how it was done; with a calm quiet humane approach, with skilled friendly staff in a very professional manner.  We also had some time to look at the lairage, which was clean, airy and well set up to handle large numbers of sheep.  During peak production the plant can cope with 5,000 lambs day.  We looked at the skins that were being salted and packed on site, by a third party, many of these skins end up in China and return to the UK in the form of Ugg boots!
The dirty water produced on the whole site, from the washings of the processing lines, to floor washings and lorry washings is all collected, aerated and filtered through reed beds before ending up, after rigorous testing back in the local stream.


It really was a fantastic visit and one that I will repeat again with another batch of lambs.  To see the end result of 10 months of shepherding, ultimately seeing the carcase that will be processed and delivered to Sainsbury's was very satisfying. I would recommend all farmers to go and see this with their own stock, work with the customer to get more efficient at producing what the customer needs.
Posted by Jake Freestone at 11:39 No comments:

First Trees Planted in the COCO 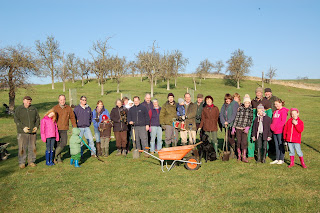 Today was the first ever planting day for COCO (Conderton and Overbury Community Orchard) and what a great day it was.  It started as a crisp sunny morning with brilliant blue sky and a light frost on the ground.  Derek and Gordon gave everyone a quick demonstration of how to plant each of the trees then armed with a map everyone grabbed their spades and set off in different directions to make a start. 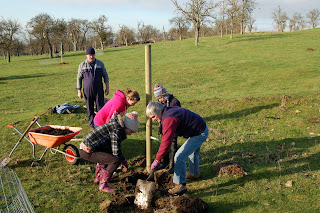 We started with 18" deep hole, filled it with a compost to act as a fertiliser, planted the tree, firming down the soil all of the time to ensure there are no air pockets.  After that a small stake was banged in next to the tree and a small strap attached to hold it firm.  More compost was applied, as a mulch to keep the weeds at bay and finally a plastic tree guard put around the tree to protect it from voles and mice.  It was wrapped up with a 6' mesh guard to stop sheep and deer nibbling the growing points then it was 'job done'. 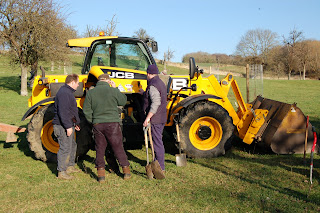 10 cider apple trees where planted (5 'Ten Commandments' and 5 Tom Putts) and 16 perry pear trees (5 Blanckney Reds, 5 Moorcrofts and 6 Judge Amphletts) all within an hour and a half.  It was a great community effort, helped by the weather, but a great effort by everyone involved.  A huge thank you to everyone who volunteered, it's great to know the community spirit is alive and well in Overbury and Conderton.  After the planting some investigation of the new JCB was required by the engineers among us. 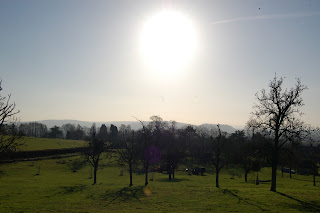 Posted by Jake Freestone at 21:11 No comments:

Time For An Unseasonal Haircut 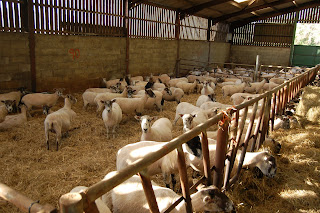 Now its time for something different!  Last week we tried a new management practise with the early lambing ewes at Park Farm﻿ and that was to give them a very unseasonal haircut.  Don't worry though, they have about 6 weeks before they lamb and then a further two weeks around the farm buildings which will give them plenty of time to grow a nice new woolly coat.  There are many positive reasons to winter shear the ewes.  Firstly they will be more comfortable and cooler as they are naturally an outdoor all year around species resulting in less stress on the sheep, shearing put to one side, but once a year they get that anyway.  They should also eat less and be more efficient with what they eat, as they are no using energy to keep cool.  Click YouTube - Farmer Jake to see the action! 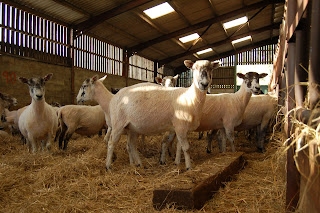 From our point of view any ewes having difficulties during lambing should be easier to spot, although they might be harder to catch!  We should, in theory, be able to put a few more ewes in each pen, as they require less space.  It is much easier to assess the condition of the ewes and put the ewes in better condition groups, i.e. a thinner twin can be bumped up to the triplets to give her more feed.  It's also a much easier time of year to do the job.  We don't have to get the ewes in from the fields and spilt off their lambs, this will save us lots of time.  The coats won't grow a tremendous amount until the later summer so we won't have to gather them in the spring to 'dag' (trim) the dirty back ends of the sheep (after eating the lush grass).  It's just an experiment at this time but who knows, if it works we might be doing all of them next year!
Posted by Jake Freestone at 17:10 No comments: 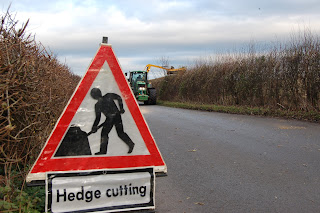 This is the time of year that Gordon is out and about cutting many miles of our own and some of our neighbours hedges.  In total we cut hedges on over 10,000 acres of farmland and many miles of roadside verges.  Some of the insides of the hedges are cut during the autumn before the crops are planted so that damage to the field margins (grass) are limited as the soil is still nice and dry and can carry the tractor.  The downside to this is that some of the berries on the hedges are cut off and therefore not eaten by the birds in the winter. 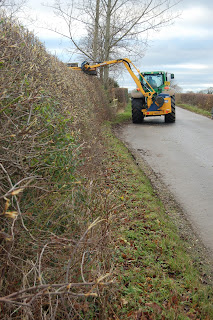 By leaving the roadside verges, spring cropping fields and many of the farm tracks until now to be trimmed, allows the hedgerow birds alot more time to feast on the hedgerow bounty.  These roadside hedges are cut every year which aids roadside safety and also, if done carefully can still provide a good source of berries even after the hedge trimmer has tidied up the hedge.  We even have a blower on the hedge trimmer to blow the chippings into the verges, off the roads, therefore reducing the risk of punctures to passing traffic.  Birds such as Yellow Hammers love a neatly trimmed hedge that they can perch up on, and guard their territory. 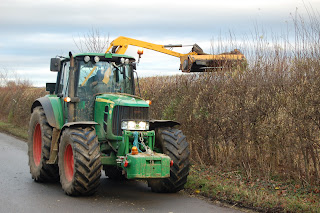 Hedge cutting is one of many services that we can offer to our neighbours around Bredon Hill.  Our farm machinery is also used at certain times of the year.  Our sprayer is contracted out to spray tall crops such as beans and oilseed rape in the summer.  With its taller wheels and high clearance the damage is far less that with a conventional tractor mounted sprayer.  It also does liquid fertiliser applications.﻿  At this time of year our snow plough is also on standby incase it is needed around the hill.  We have a specific route but can always detour to clear a driveway or farm-yard along the way.
Posted by Jake Freestone at 13:23 No comments: